The 18-year-old who took the viral video of George Floyd’s death on Tuesday told the US trial of the white police officer charged with killing the 46-year-old Black man that she knew at the time “it wasn’t right”.

Darnella Frazier was among the witnesses who gave emotional testimony at the trial of former Minneapolis police officer Derek Chauvin.

Frazier, who said she suffers from social anxiety and who has declined virtually all interview requests in the 10 months since Floyd died, testified that the sight of him on the ground compelled her to stay: “It wasn’t right. He was suffering. He was in pain.”

Chauvin, 45, is charged with murder and manslaughter for his role in Floyd’s death on May 25 last year, after he and three other police officers arrested and handcuffed Floyd on suspicion he had used a fake $20 note to buy cigarettes at a shop nearby.

Frazier, who grew up in the neighbourhood, arrived a few minutes later and filmed Chauvin kneeling on Floyd’s neck for more than nine minutes as Floyd said he could not breathe in a video that was seen by millions around the world and sparked significant demonstrations against racism and police brutality against Black people across the United States. Anti-racism protests also took place around the globe.

Other witnesses included an off-duty firefighter who said her attempts to give assistance to Floyd were rebuffed by police, a man who made an emergency 911 call after the incident to report a “murder” and a professional mixed martial arts fighter who told the court he believed he had “witnessed a murder”.

Frazier cried when prosecutors showed her a frame of her video, a moment when Chauvin, his knee on Floyd’s neck, appears to look directly into her lens.

“He had this cold look, heartless,” Frazier said, as Chauvin listened at a nearby table, taking notes in a yellow legal pad. “He didn’t care what we were saying, it didn’t change anything he was doing.”

Frazier described Floyd as “scared” and “terrified” and “begging for his life.”

Also testifying was 27-year-old Genevieve Hansen, a Minneapolis firefighter and emergency medical technician (EMT) who was off-duty and out taking a walk on the day of Floyd’s arrest.

Hansen said she identified herself as a firefighter to police on the scene because she “noticed he needed medical attention.”

“He wasn’t moving and he was cuffed,” she said.

Hansen, who testified wearing her white firefighter’s uniform with a black tie, said a police officer rejected her offers to help, leaving her “totally distressed”. 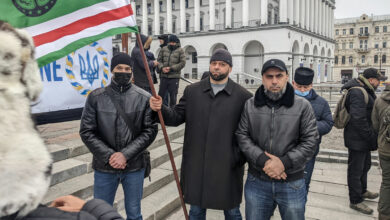 Will Ukraine be the next Chechnya after Russia’s invasion?