President Donald Trump’s favourite mantra – resonates rather cynically, as America tops the global coronavirus death toll chart. Indeed, the president’s insistence on American exceptionalism has finally brought the US into a state of exception.

The arrogance of “America First”, which pushed Trump to withdraw from the Paris climate accords, UNESCO, UNHCR, and UNRWA and belittle various other international treaties and agreements, also kept him convinced for far too long that the coronavirus outbreak in China would not threaten the US.

This, as it now turns out, was a fatal mistake.

When the White House finally realised it needed to take action, it found itself chasing ventilators across the world and cajoling “second-rate countries” to send shipments of masks, as its citizens started dying daily by the hundreds.

The dire need for basic medical supplies and equipment has even forced the Trump administration to rein in its anti-China rhetoric and start talking about “cooperating” with Beijing.

But the US is not alone in scrambling to obtain ventilators and other much-needed medical gear for the fight against the coronavirus outbreak.

Governments in Europe have asked local factories to adapt manufacturing lines to produce ventilators as fast as possible. Elsewhere, security and intelligence services, including the Israeli Mossad, have engaged in various operations abroad to secure shipments of ventilators into their countries.

At an average cost of $50,000, this medical apparatus now seems to have become far more important than tanks and rockets that cost millions.

Indeed, who could have predicted the rise of the ventilator in world politics and its strategic significance to state survival!

The newly acquired strategic value of the ventilator points to a major flaw in the threat perceptions that have dominated world politics for centuries.

The almost $2 trillion spent globally on weapons each year have done nothing to protect countries from the COVID-19 pandemic. Nor have the billions of dollars spent on border security.

The threat of this virus defies the modern demarcations of state sovereignty we have had since the 1648 Westphalia Treaty, after which states grew obsessed with borders, authority, nations and most of all – military power.

But the COVID-19 outbreak recognises no borders, no sovereignty, no hierarchy of world power, or the might of military arsenals, which have always been deemed the ultimate guarantor of national security.

Plans for strategic defence were typically based on the slightest possibility or perception of a potential threat. Anchored in this extreme Hobbesian vigilance of “war of all against all”, this approach led to the allocation of astronomical budgets for weapons purchases and a tiny fraction given to health sectors.

Last year, the US Congress allocated $738bn for defence and $3.8bn for healthcare from the national budget for 2020. According to some estimates, there are currently 160,000 ventilators across the US, leaving the country short by 580,000 ventilators if it faces a “severe” spread of the virus. Acquiring the needed additional ventilators would cost approximately $29bn or 4 percent of the defence budget.

The US is not the only country with an absurd disparity in budgeting for potential military threats to national security versus all others. While the World Health Organization had been warning for years that a pandemic of this scope is quite possible, given the constant emergence of zoonotic viruses like the coronavirus, few countries have taken heed.

Those who have – South Korea, Taiwan, Singapore, and others – have invested in their healthcare systems and have had a much easier time controlling their COVID-19 outbreaks.

And it is not just pandemics that pose a much more realistic threat than war. Climate change is another. According to the United Nations, the world needs to invest $300bn to stop the further rise of global temperature over the next 20 years; this is equal to what the world’s military spends every 60 days. In its 2020 budget, the US, the richest country in the world, allocated $800m to environmental programmes, that is 0.1 percent of its defence budget.

The coronavirus outbreak and the international scramble for ventilators should force governments around the world to take heed of the vitality and depth of global interconnectedness, consider collective defence and rethink the very notion of orthodox sovereignty.

It should also cause countries and international institutions to revisit the order of threats from a global perspective instead of the current and parochial state-centric one. That is to say, the focus should fall on those threats that could put the entire planet and its inhabitants on the verge of annihilation.

Desperate responses to the current crisis and tensions between countries demonstrate the necessity of collective global action on global emergencies. The COVID-19 pandemic should be a wake-up call for world governments to the fact that humanity faces serious and real collective threats in which tanks and fighter jets are all but useless.

This pandemic should be an opportunity for a global overhaul of international cooperation and national budgets which should focus on collective survival, not on narrow state-centric interests.

This Christmas, make sure your chocolate does not harm the planet 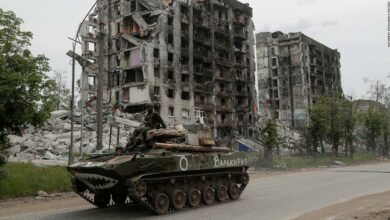 Can the African Union be a neutral arbiter of peace in Ukraine? Why the closure of an old Palestinian bakery in Jerusalem matters