Residents of Petah Tikva in central Israel on Monday woke up to find the fountain in its Donald Trump Square spurting fake blood after vandals added dye to the waters in a protest against US-backed West Bank annexation plans.

“Annexation will cost us in blood,” was graffitied in red at the site, which was inaugurated last year in honor of the US president’s 2017 recognition of Jerusalem as Israel’s capital.

The vandalism was the latest in a series of protests against plans by the government to begin annexing parts of the West Bank as early as this week, sparking fears of a new outbreak of violence by Palestinians angry over the move, which would chop wide swaths out of their prospective state.

“There are steps that cannot be taken back. We will never forget our fears from the terror attacks of our childhood,” the demonstrators behind the protest told Channel 12, referring to waves of Palestinian led violence over the past 30 years.

“Annexation will create a security and economic disaster, and all this by politicians who are playing with fire at the expense of the citizens during a period of economic crisis,” the organizers said, apparently referring to threats of  international sanctions in response to annexation.

The protest comes two days before Prime Minister Benjamin Netanyahu’s declared start date for annexation, though it remains unclear whether Israel will move ahead with the move and how much territory it will seek to absorb.

The Israel Defense Forces has reportedly been placed on high alert ahead of the target date, amid growing fears it could spark violence in the West Bank.

Under a coalition deal between Netanyahu and Blue and White leader Benny Gantz signed last month, the government can pursue annexation of all 132 settlements and the Jordan Valley — the 30 percent of the West Bank allocated to Israel under the Trump administration’s peace plan — from July 1, though recent reports indicate such a move, should it come, may apply to a much smaller area of land. The plan also conditionally provides for a Palestinian state on the remaining 70% of the territory.

The prospect of unilateral annexation has been condemned internationally, with European and Arab states, as well as senior members of the US Democratic Party, warning the Israeli government against the move.

Donald Trump square is located near the city’s municipal building and includes a fountain with an illuminated sculpture incorporating the Israeli and American flags.

A sign at the square calls Trump “the first to acknowledge Jerusalem as the Capital of Israel.”

A sign at the entrance to a new community on the Golan Heights also named after the US president to thank him for recognizing Israel’s sovereignty over the territory was also vandalized recently, with most of the letters ripped off. 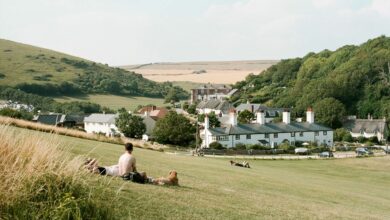 Beaches and landscapes of an English summer