The Manufacturers’ Association, which represents some 1,500 firms and 400,000 workers, said the loss was mostly due to employees choosing to stay at home due to the nearly non-stop Palestinian rocket fire from Gaza.

About a third of workers were absent from work in southern Israel and about 10 percent stayed home in areas closer to the commerical hub of central Israel, the association said.

“The non-arrival of workers led to a significant decrease in the outputs of industrial companies, a decline in sales and a direct harm to revenues,” it said.

Medical officials in Gaza said 248 people were killed during the fighting, while in Israel medics put the death toll at 13. A ceasefire held into a fourth day on Monday.

Israel’s government has yet to publish its damage estimate from the May 10-21 conflict.

Fifty Israeli factories suffered millions of shekels of direct damage from rocket shrapnel, the manufacturers association said. It did not include in its estimate indirect damage, like cancelled orders.

During the last major hostilities between Israel and Hamas, a 2014 war that lasted seven weeks, Israel’s central bank estimated the country’s economy took a 3.5 billion shekel hit, plus nearly the same amount in damage to the tourism sector.

Ron Tomer, president of the association, called on the government to set up a permanent compensation scheme that would more efficiently help businesses in future rounds of fighting. Israel’s parliamentary finance committee is slated to debate the issue on Tuesday.

“It is not time for bureaucracy and procrastination rather for rehabilitation and full support for these companies, which throughout the operation proved they know how to function and produce under rocket fire,” he said.

Israel’s economy is starting to rebound from the coronavirus pandemic, with official data on Monday showing the jobless rate at 7.9 percent in April while other data signal a spike in job vacancies. Growth is expected at 4-7 percent in 2021 after a 2.6 percent contraction in 2020. 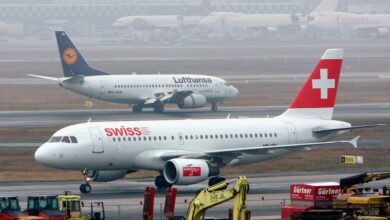 Lufthansa and Swiss Air to suspend flights to Ukraine capital