Israeli forces killed two Palestinian women on Sunday after one ran towards troops and the other stabbed a soldier in separate incidents in the occupied West Bank, Israeli security officials said.

The bloodshed follows a string of deadly Arab attacks in Israel. There have also been Israeli raids in and around the West Bank city of Jenin, a militant stronghold, against what Prime Minister Naftali Bennett has called “a new wave of terrorism”.

No weapon was found on the body of the woman shot in Bethlehem after she ignored soldiers’ calls and warning fire to stop approaching, the Israeli military said, adding that it had launched an investigation.

In the second incident, a woman armed with a knife was shot dead after she slightly wounded a paramilitary border policeman in Hebron, outside the Tomb of the Patriarchs, which Muslims call al-Ibrahimi mosque, Israeli security officials said.

Israeli forces have been on high alert following attacks by three members of Israel’s Arab minority and two Palestinians from the West Bank that have killed 14 people in Israel since late March.

More than 20 Palestinians, many of them armed militants, have been killed by Israeli forces since January, while Palestinians have reported a rise in violence by Israeli settlers in the West Bank.

An incident on Sunday, on a highway near the southern Israeli coastal city of Ashkelon, painted a portrait of a country on edge.

A man attempted to grab a soldier’s assault rifle – many troops have been ordered to take their weapons home while on leave – and was shot dead by a senior army officer who was passing by.

Initial Israeli media reports said the assailant was apparently a Palestinian who wanted to carry out a shooting. Police later identified him as an Israeli Jew with mental health problems.

Hussein al-Sheikh, a senior Palestinian official, said Israel’s expansion of settlements on occupied land Palestinians want for a state and visits by far-right Israelis to the Al-Aqsa mosque compound in Jerusalem have led to escalation, at the start of the Muslim holy month of Ramadan, when violence has erupted in the past.

Bennett has said the assailants were “trying to destroy us” and were “moved by hatred of Jews and of the State of Israel”. 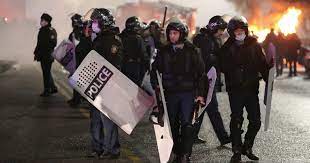 The scenario of chemical attacks in Syria is repeated in Ukraine