Israel on Friday appealed to the United States not to remove Iran’s Revolutionary Guards from its blacklist of foreign terrorist organizations as part of a revived nuclear deal.

The Revolutionary Guard Corps “is a terrorist organization that has murdered thousands of people, including Americans,” Prime Minister Naftali Bennett and Foreign Minister Yair Lapid said in a joint statement.

“We refuse to believe that the United States would remove its designation as a terrorist organization,” they said.

The statement comes after the US on Wednesday said Washington and Tehran were close to agreement on restoring the 2015 nuclear accord.

“We are close to a possible deal, but we’re not there yet,” said State Department spokesman Ned Price. “We do think the remaining issues can be bridged.”

Sources close to the talks said outstanding issues included Tehran’s demands for Washington to delist the Revolutionary Guards as a terrorist group.

The US designated the Guards as a “foreign terrorist organization” under then-president Donald Trump in April 2019. It came the year after Trump unilaterally withdrew the US from the nuclear deal, known formally as the Joint Comprehensive Plan of Action.

The JCPOA gave Iran relief from sanctions in return for curbs on its nuclear program. It was seen by world powers as the best way to stop Iran from building a nuclear bomb – a goal it has always denied.

But the deal started to unravel in 2018 when Trump withdrew from it before imposing tough economic sanctions on Tehran. Iran retaliated by rolling back on its own commitments, including nuclear enrichment.

Direct talks to revive the pact have been ongoing for weeks in Vienna between Iran, Britain, China, France, Germany and Russia, with the US participating indirectly.

Israel considers its arch-foe Iran an “existential threat” and the two countries have been at loggerheads since the 1979 Islamic Revolution that toppled the Western-backed shah.

Iran is also a close ally of Lebanon’s Shia movement Hezbollah which has fought Israel and is accused by it of being behind a string of anti-Israeli attacks, including the 1992 bombing of Israel’s embassy in Argentina that killed 29 people.

“The fight against terrorism is a global one, a shared mission of the entire world,” Bennett and Lapid said in the joint statement. 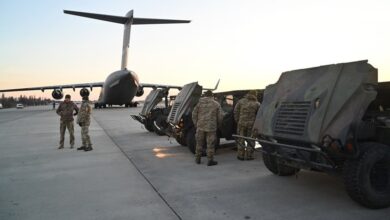