Israel called on Tuesday for the immediate resumption of talks on the return of four Israelis held for years in the Gaza Strip after the Palestinian territory’s Hamas rulers said they might be willing to move forward on the issue.

Last week, Israel linked any future coronavirus aid to Gaza on progress in efforts to recover two soldiers who went missing in the 2014 war and two civilians who separately slipped into the enclave. Hamas holds all four.

The militant group has never stated whether the two soldiers are dead or alive, but neither has it provided a sign of life, as it has done in a previous similar case.

It has said that returning the four would require negotiating a prisoner swap and would not be done in exchange for humanitarian aid.

In a statement on Tuesday, Israeli Prime Minister Benjamin Netanyahu’s office said his national security team “stands ready to take constructive action with the goal of returning the fallen and the missing and of ending the affair, and are calling
for an immediate dialogue via mediators.”

In past rounds of talks, Egypt, Qatar and the United Nations have served as intermediaries.

Yehya al-Sinwar, Hamas chief in Gaza, has rejected the linkage to coronavirus aid but on Thursday said he saw “a possible initiative to revive this issue” of the Israelis held in the territory if Israel frees jailed Palestinians.

“A prisoner swap will exact a big price” from Israel, he told Hamas’s Al-Aqsa TV, saying that were it to start by releasing sick, old and female prisoners “we may offer something partial in return.”

Hamas, hoping to head off a contagion it says has so far caused 13 cases in blockaded Gaza, wants Israel to ease economic conditions. Israel is also loathe to deal with a new humanitarian crisis on its border with Gaza, now sealed by both sides.

Israel in the past has freed hundreds of jailed Palestinians, including many militants, in exchange for the recovery of dead or captive Israelis.

Mexican president says Mexico doing better than US on coronavirus Ukraine aide says any Moscow deal not worth ‘broken penny’ 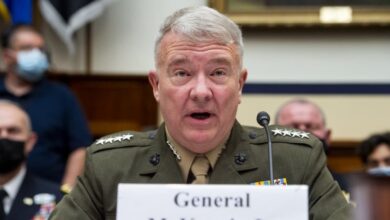 After Houthi attacks, senior US general in UAE to bolster defenses