Israel has stopped 1,000 doses of Russia’s Sputnik V coronavirus vaccine that are intended for front-line medical workers from entering the besieged Gaza Strip.

Palestinian Health Minister Mai Alkaila said in a statement on Monday that Israel bore “full responsibility” for blocking the shipment acquired by the Palestinian Authority (PA), which governs parts of the Israeli-occupied West Bank.

The PA has said it will share its vaccine supply with Gaza, where Hamas has been in power since a violent power struggle in 2007. The enclave, which is home to more than two million Palestinians, has yet to receive any vaccines. Authorities there have reported more than 53,000 infections and at least 537 deaths since the start of the pandemic.

The PA has acquired about 2,000 doses of the Sputnik V vaccine.

Israel – which is carrying out one of the world’s fastest vaccination campaigns per capita – has faced international calls to share its stocks as an occupying power with Palestinians living in the West Bank and Gaza.

COGAT, the Israeli military body that runs civilian affairs in the occupied Palestinian territories, said the PA had requested to transfer 1,000 vaccine doses to Gaza but that the request was “waiting for a political decision”.

Gaza has been under siege by both Israel and Egypt for more than a decade, during which time Israel launched three military assaults on the Strip, devastating much of coastal enclave’s infrastructure, including its healthcare facilities.

Israel has demanded the release of two Israelis reportedly held in Gaza as well as the remains of two soldiers killed during a 2014 assault. In exchange, Hamas is likely to demand the release of a large number of Palestinian prisoners held by Israel.

An Israeli official said allowing the vaccine shipment through was still being debated late Monday.

“It wasn’t blocked. They are still contemplating it,” the official said, speaking on condition of anonymity.

Al Jazeera’s Harry Fawcett, reporting from West Jerusalem, said lawmakers in the Knesset continued to discuss whether or not to allow the vaccines into Gaza.

“One argued these vaccines would not go to health workers but to senior Hamas officials. As far as members of the largely Palestinian-Israeli Joint List is concerned, this is withholding essential healthcare from an occupied population and, therefore, a war crime,” he said.

The National Security Council official, Roi Binyamini, told the panel the government had no intention of sharing Israel’s own supply of vaccines with Gaza. But he said the government was weighing requests from other parties to allow the PA to deliver its own vaccines to the territory. He said he expected a decision to be made quickly.

Earlier Monday, the PA said it had pushed back the roll-out of its vaccination campaign in the West Bank because of a delay in deliveries.

It said it was anticipating a shipment by the middle of this month, enabling it to start vaccinating the public in the West Bank while sharing stocks with Hamas.

“There has been a delay in the arrival of the vaccine,” Palestinian Prime Minister Mohammed Shtayyeh said ahead of a weekly cabinet meeting, without providing further details.

He said the launch of vaccinations would be announced “at a later time” when sufficient supplies arrive.

The PA is expecting two million doses ordered from various manufacturers, in addition to vaccines from the UN-backed COVAX programme, set up to help less wealthy nations procure vaccines.

It began vaccinating front-line healthcare workers earlier this month with an initial procurement of 10,000 doses of the Sputnik V vaccine from Russia, as well as several thousand doses of the Moderna product via Israel.

So far, the PA has registered nearly 115,000 coronavirus cases in the West Bank, including nearly 1,400 deaths. 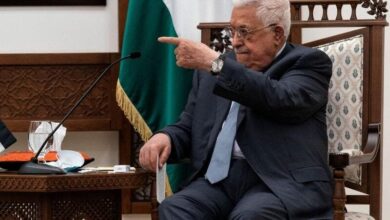