A newly discovered chalk drawing of Jesus Christ with striking similarities to the Mona Lisa is believed to be a previously unknown work by Leonardo da Vinci.

Italian researchers, who found the work hidden away for centuries in a private collection, claim that the chalk drawing is almost certainly the work of the Renaissance master.

Their claim will provoke intense scrutiny from the art world due to the potential significance of the discovery.

‘It is a remarkably beautiful and refined work and I’m absolutely convinced it is a sketch by Leonardo,’ Italian art historian Annalisa Di Maria, who has studied the picture, told The Daily Telegraph.

Laboratory testing done on the paper on which it is drawn has dated it back to the early 16th century, she said.

In 1516, he moved to France to work for King Francis I, and died there in 1519. There are only a handful of surviving paintings by the artist.

‘There are lots of elements – the posture of Christ is typical of Leonardo, who rarely drew figures front-on but from an angle, so that they were facing the viewer from a three-quarters perspective,’ said Ms Di Maria.

‘It has that dynamism and sense of movement that is typical of Leonardo,’ the historian said, who is the author of ‘The Mona Lisa and its Meaning – Leonardo da Vinci and the Neoplatonic School’, published last year.

She drew particular attention to the beard, saying that it is practically identical to Leonardo’s self portraits. The same goes for the eyes, she said. 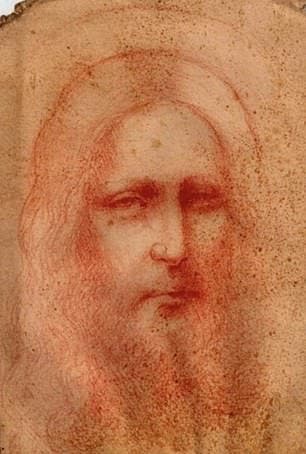 Italian researchers have found a previously unseen sketch of Christ (pictured) that they believe to be the work of Leonardo da Vinci, the master painter who was also behind The Mona Lisa and The Last Supper

The fact that the painting is in red chalk – a medium often used by da Vinci, including in the sketches of the last supper – was another indicator that it could be one of his, Di Maria added.

The sketch is currently in the possession of two collectors from the northern Italian town of Lecco, who themselves acquired it from a private collection, the historian said.

It is not currently clear where the artwork had been kept all these years, nor is it confirmed that it is an authentic piece of work by Leonardo.

The discovery was announced by the Leonardo da Vinci International Committee.

The group said in a press release that 60 page  ‘research study conducted will be presented in a conference in Florence shortly, as soon as the emergency ends and it will be possible to hold conferences and meetings again’

Emeritus Professor in the History of Art at Oxford University, Martin Kemp, who is one of the word’s leading experts on the life and works of Leonardo da Vincim was more cautious than about attributing the sketch to the artist.

‘I wouldn’t dismiss it out of hand but I simply can’t tell without seeing the drawing and the scientific evidence,’ he told The Telegraph. ‘I would need to see if it is drawn left-handed. Leonardo drew everything with his left hand.’

He said that the dating of the paper would also need to be scrutinised by independent experts, and that there was a possibility that the drawing had been produced by a member of da Vinci’s art school.

Professor Kemp said there are a number of paintings of Christ and Salvator Mundi (Savior of the World) that were produced by the artist’s students.

The professor did note the use of red chalk, saying that ‘Leonardo was a great pioneer of red chalk, it was one of he favourite media’, adding that while he’s not dismissing the possibility of it being genuine, ‘it has got a long way to go’.

QR-coded Tombstones Give New Experience of Remembering The Departed

Pilgrims Around The World Gather in Bethlehem to Celebrate Christmas