A rocket attack in northern Iraq has killed an American contractor and wounded several military personnel, the US-led coalition against the Islamic State of Iraq and the Levant (ISIL or ISIS) has said.

“One US civilian contractor was killed and several US service members and Iraqi personnel were wounded in a rocket attack [on Friday] on an Iraqi military base in Kirkuk,” the coalition said in a statement.

“Iraqi Security Forces are leading the response and investigation,” it added, without specifying who might be responsible for the attack.

US interests in Iraq have been hit by a flurry of rocket attacks since late October that have not been claimed, but which Washington has blamed on Shia paramilitary groups backed by Iran, which wields growing influence in the country, particularly through armed groups.

Washington has called on Baghdad to take steps to protect American interests in the country in the face of the attacks.

US Defense Secretary Mark Esper told reporters earlier this month that he had expressed “concern about the optics in attacks on bases in Iraq where US troops and material might be,” in a call with acting Prime Minister Adel Abdul Mahdi.

The United States has “a right of self-defence, that we would ask our Iraqi partners to take proactive actions … to get that under control because it’s not good for anybody.”

Explosion reported outside US embassy in Tunisia 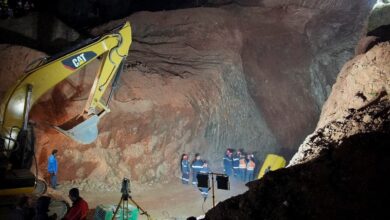