Iran’s President Hassan Rouhani on Wednesday told the United States it “should not plot against the Iranian nation every day,” amid fresh tensions between the arch foes in the Arabian Gulf.

Tehran and Washington have traded barbs over a spate of incidents in the past year involving their forces in the sensitive waters of the Arabian Gulf.

Their latest high-seas confrontation came on April 15, when the United States said 11 Iranian boats harassed its navy ships in what it described as the international waters of the Arabian Gulf.

President Donald Trump then tweeted that he had ordered the US Navy to “shoot down and destroy any and all Iranian gunboats if they harass our ships at sea.”

I have instructed the United States Navy to shoot down and destroy any and all Iranian gunboats if they harass our ships at sea.

159K people are talking about this

“They should not plot against the Iranian nation every day,” responded Rouhani said in a televised address during a cabinet meeting.

Photos show several Iranian #IRGC vessels approaching US ships in the Arabian Gulf. The #USNavy sent multiple warnings via bridge-to-bridge radio and short blasts from the ships’ horns before the Iranian vessels left an hour later.#Iranhttps://english.alarabiya.net/en/News/middle-east/2020/04/16/Iranian-IRGC-vessels-conduct-dangerous-approaches-near-US-ships-in-Arabian-Gulf.html … 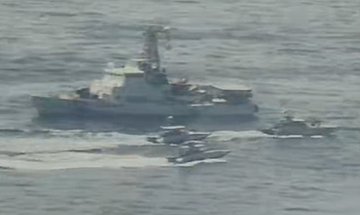