Iranian oil exports, which have been on a rising trend while talks make progress on reviving the 2015 nuclear deal, have dropped so far in May, according to three assessments, reflecting a lull in demand from China.

Tehran’s oil exports have risen since late 2020, despite US sanctions toughened under US President Donald Trump. Joe Biden’s administration took office in January pledging to rejoin Iran’s nuclear deal with world powers, which Trump had quit.

A trade source said on May 14 that Petro-Logistics, which tracks oil flows, told its customers Iran’s crude exports dropped provisionally to zero in May, from around 703,000 barrels per day (bpd) in April, citing slowing intake from Chinese independent refiners.

Geneva-based Petro-Logistics told Reuters on Tuesday the figure was being updated as more information comes to light.

“Our analysts observed a noticeable slowing of exports in the early part of May, which coincided with a build-up of floating storage in the East,” its Chief Executive Daniel Gerber said.

China has been taking more of Iran’s crude in recent months.

A Chinese Foreign Ministry spokesperson did not comment on a slowdown in Chinese Iranian oil purchases in May, but said such bilateral energy trade was normal.

“China and Iran are carrying out normal economic and trade cooperation, including energy, within the framework of international law, and the relevant cooperation is reasonable and legitimate,” the spokesperson said.

A trader who regularly deals with Chinese independent refiners said there was now a lull in demand.

“Import quotas are running out,” the trader said. “And there are plentiful stocks at Qingdao (Shandong) tanks.”

There is no definitive figure for Iranian exports and estimates often fall into a wide range. Iran generally does not release figures and has said documents are forged to hide the origin of its cargoes and get around the sanctions.

Others who track the exports also see a drop in May, but a less pronounced one.

“The exports dropped to under 600,000 bpd from May 1 until now,” said Sara Vakhshouri of consultant SVB International.

“Exports in May could have a spike in the days to come,” she said, if the nuclear deal is revived. SVB had estimated April exports at about 750,000 bpd.

Oil prices have fallen this week on speculation a deal may be close. Talks in Vienna between world powers and Iran on reviving the nuclear deal have been under way since April.

A source at a third company that monitors Iranian shipments said crude exports in May were lower than in recent months, due to slowing Chinese demand.

“Possibly Chinese teapots not buying,” the source said, using an industry term for the independent refineries.

A lifting of US sanctions would in theory allow Iran to boost crude exports back to 2.5 million bpd, a rate last seen in 2018 when Trump exited the nuclear deal.

Why is Taiwan using APEC to lobby to join the CPTPP trade pact?

Saudi startup scene heats up in 2019 with 92 pct increase in deals: Report 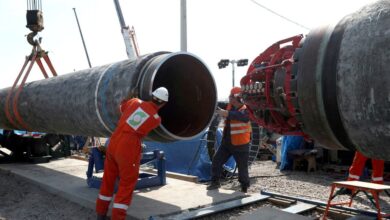