Iran remains the biggest threat in the region only behind al-Qaeda and ISIS, while China and Russia’s resurgence has forced Washington to shift resources, the top US military commander for the Middle East said Wednesday.

As a result of the slaying of Iran Quds Force chief Qassem Soleimani in January, Washington imposed a form of “contested deterrence with Iran,” CENTCOM Commander Gen. Kenneth McKenzie said.

In a webinar with the Middle East Institute, McKenzie said that Iran – as the “single, biggest threat in the region” – was forced to recalculate its actions because they did not believe that the US would take such action to kill Soleimani.

“They pushed for many years to find a red line and they finally did,” he said.

The US general said that attacks attributable to Iran have not been generated following the drone strike on Soleimani, such as the attacks on Saudi Aramco in 2019. “They are deterred because they have seen that we have capability and will,” he said.

“Iran can control early steps, but it is clear that we will control the final steps [in any confrontation],” he added.

But McKenzie was quick to say that he does not want to paint “too rosy a picture” of the decline in tensions because this could change quickly.

McKenzie also criticized Iran for preventing a solution to the yearslong conflict in Yemen.

He praised Saudi Arabia for wanting a negotiated end to the conflict and their willingness to negotiate in good faith.

“The Houthis have an opportunity to come to an agreement to get a lot of things they want [in Yemen], but unfortunately, there is a third party,” McKenzie said, calling out Iran as wanting nothing but for the conflict to continue.

He said that it is in everyone’s interest to come to a negotiated settlement and voiced his belief that the United Arab Emirates “would sign on to that too.”

“Iran is the only one who doesn’t want this and they can encourage at a relatively small investment and allows them to continue to dig at Saudi Arabia.”

Turning to Russia and China’s roles in the Middle East, the commander said that both countries carefully studied the US in recent years. He said that the US would have to shift resources to be able to more directly confront threats, “most dangerously China in my opinion.”

McKenzie admitted that China was moving in “principally economically,” to the region and that it wants access to “other things.” 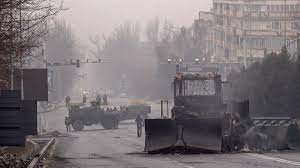