Iranian lawmakers chanted “death to America” during a parliamentary session on Sunday, claiming they were “in support” of the protests against racism in the US.

The death of George Floyd, a black man, on May 25 in Minneapolis, Minnesota at the hands of a white police officer who kneeled on his neck for more than eight minutes triggered nationwide protests in the US over racial injustice.

“To show respect for the movement of the oppressed in the US, I ask you to stand for a few seconds and chant ‘death to America’ to show our respect,” an Iranian lawmaker said, after which lawmakers stood up and began chanting “death to America” in parliament.

Iran has been accused of hypocrisy in its reception of the protests in the US.

The Islamic Republic often expresses support for protesters in non-friendly countries despite its long track record of violence against protesters at home over the years.

Iranians launched a hashtag in recent days against Supreme Leader Ayatollah Ali Khamenei after he attacked the US government for the police killing of Floyd, reminding him of the Iranians killed under the current regime over the years and arguing that he and other Iranian officials are not in a position to speak against state violence in other countries given the Iranian regime’s track record of violence against its own citizens.

Security forces killed about 1,500 Iranians during the country’s anti-government protests last November, according to Reuters.

Clashes have broken out between security forces and locals in the city of Delfan in Iran’s Lorestan province following protests in the city earlier in the day, according to reports.https://english.alarabiya.net/en/News/middle-east/2020/06/07/Clashes-between-security-forces-and-locals-in-Iran-s-Lorestan-province.html … 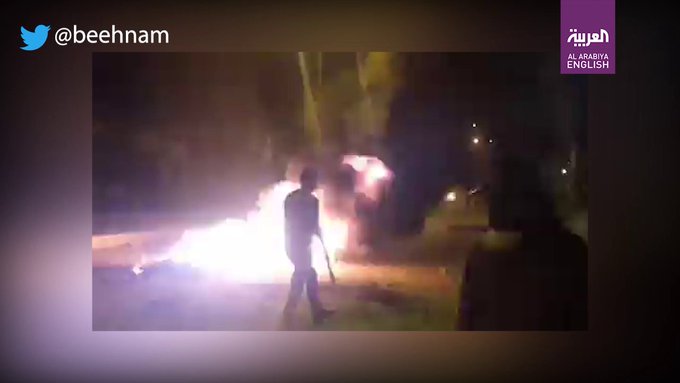