An Indonesian macaque appeared to be a natural with the camera when he copied a photographer by peering through the viewfinder like a human.

A clip,taken by photographer Mogens Trolle, 50, showed the black macaque moving the camera around and holding it in both hands, as if he was taking a picture.

He moves the camera around and watches as the view through the viewfinder alters, looking as if he is trying to get the best angle for his shot.

The photographer had just stepped away from the camera to stretch his legs and when he returned he found the monkey mimicking him before making a swift exit shortly after.

The comical video, said to have been recorded in Indonesia’s Tangkoko Nature Reserve, has captured the attention of social media users.

Sharing the clip, for which a date of recording is not known, Yashar Ali said: ‘This is amazing. @MogensTrolle was taking photos in Indonesia’s Tangkoko Nature Reserve when he got up to stretch his legs.

‘When he came back, he found this wild black crested macaque using his camera like a human being.

‘Our primate cousins learn almost everything by mimicking.’

Another said: ‘Wonderful – reinforces why we need to protect the habitat of our primate cousins.’

The photographer has pictured wildlife for more than 25 years across the world.

Some people on social media were also left questioning whether or not the monkey had taken any good pictures.

One wrote: ‘Is it bad I see this and think… hey did the macaque manage to get any photos?’

‘He probably takes better pictures than I do,’ said another.

This is not the first time a monkey has shown an interest in a camera, with one incident even resulting in a copyright court case. 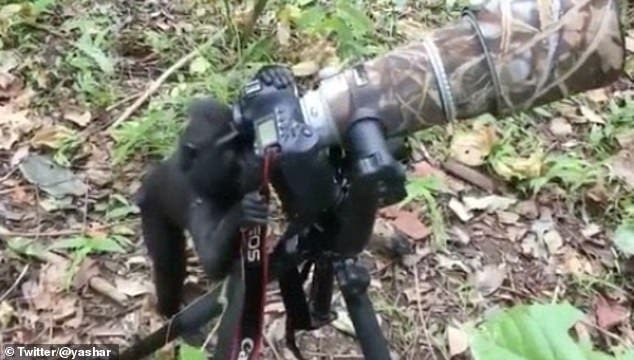 In 2015 People for the Ethical Treatment of Animal (PETA) filed a novel copyright lawsuit against photographer, David Slater, whose camera was used by a crested macaque to take the photos in 2011.

PETA’s suit sought financial control of the photographs — including a now-famous selfie of the monkey grinning — for the benefit of the animal named Naruto.

The monkey’s smiling selfie was shot during a trip Slater took to Indonesia.

In 2018, a U.S. appeals court decided that humans trump animals when it comes to who — or what — owns the copyright on original artwork created by animals.

Palestinians Get Into The Ramadan Spirit With Fire and Musical Performers