A three-kilometre (two-mile) stretch in New Delhi featuring some of India’s most iconic landmarks is to be redeveloped, angering historians and conservationists who say the move will rob the country of its heritage and valuable public space.

Federal authorities last month said they would change the land use for the 86-acre (35-hectare) area that includes Parliament House, Rashtrapati Bhavan (the presidential palace), and the India Gate war memorial to “government use” from recreation and public facilities.
Conservationists fear that the Central Vista redevelopment project estimated to cost estimated to cost 200 billion rupees ($2.6bn) will obliterate the history and character of the area, which also has among the biggest public spaces in a city of more than 20 million people.

“The Central Vista is significant for historical, lived and architectural heritage. Equally importantly, it is a public-use area for tourists and residents, and a green area,” said Kanchi Kohli, a senior researcher at the Centre for Policy Research.

“The redevelopment represents a form of ‘government sprawl’ where powerful offices appropriate urban space with little concern for planning or socio-ecological consequences,” she told the Thomson Reuters Foundation in emailed comments.

In India, as in many countries, rapid urbanisation is putting greater pressure on governments to build office blocks and rail networks, which has led to the razing of old buildings and traditional markets.

Cities risk losing not just their history and heritage, but also traditional knowledge which is key to promoting inclusiveness, sustainability and resilience, according to urban experts.

The Central Vista project, due to be completed by 2024, envisages modern buildings replacing century-old structures that are as familiar to many Indians as the Taj Mahal.

The Central Public Works Department, which is overseeing the project, said in its redevelopment proposal that the area currently suffers from inadequate space and infrastructure.

The area lacks basic facilities, amenities and parking, which “leads to congestion and gives a poor public perception”, the proposal said.
‘Losing heritage to modernisation’

New Delhi was established as the capital of the Indian Empire in 1911 when the colonial British rulers moved the capital from the eastern city of Calcutta, now called Kolkata.

Architects Edwin Lutyens and Herbert Baker planned the central administrative area of the city, retaining a third of the area for open spaces, including wide lawns that draw crowds of residents, tourists and vendors all year round.

The Rajpath (King’s Way) boulevard connects the iconic India Gate to Rashtrapati Bhavan and is the site of the annual Republic Day celebrations featuring grand displays by the armed forces and a parade of colourful floats from each state.

The Central Vista is an amalgam of traditions from across India: The distinct circular design of Parliament House; the red and beige sandstone from Mughal architecture; and the dome of the Rashtrapati Bhavan inspired by a Buddhist stone monument.

“The historical significance of the Central Vista lies in its architecture, town planning and politics,” said Swapna Liddle, a historian at the Indian National Trust for Art and Cultural Heritage.

“Its history is the history of India,” she said.

That does not mean that “it should be frozen in time”, she added, pointing out that several buildings have been upgraded to add amenities such as air-conditioning and internet cables.

“More can be done, as long as our starting point is a will to conserve and prolong the life and use of the existing buildings,” Liddle said.

“Losing heritage to modernisation is not inevitable, but it requires careful choices. The decision on what should go and what should stay, and what should come in place of things that are removed” must involve a body of experts, she said. 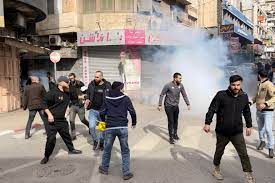