Incessant social media trolling by right-wing forces has forced a popular jewellery brand in India to withdraw its advertisement featuring an interfaith couple.

The 40-second commercial, released by Tanishq last week, showed a pregnant Hindu bride attending a baby shower organised by her Muslim in-laws.“She is married into a family that loves her like their own child. Only for her, they go out of their way to celebrate an occasion that they usually don’t. A beautiful confluence of two different religions, traditions and cultures,” the advertisement’s YouTube description said.

The advertisement was a part of Tanishq’s latest jewellery line called “Ekatvam”, Sanskrit word which means oneness, and was released ahead of the festival season marked by Durga Puja and Diwali, two of Hindu religion’s most important festivals.

But many social media users accused the company of promoting “love jihad”, a right-wing campaign that accuses Muslim men of luring Hindu women into marriage and converting them to Islam.

However, interfaith marriages in India are frowned upon and uncommon.

On Monday, the hashtag #BoycottTanishq trended on Indian social media, with a barrage of posts and comments on the YouTube video accusing the company of “hurting” the religious sentiments of the Hindu majority and demanded an apology.

On Tuesday, Tanishq pulled the advertisement from the social media platforms, saying the “film stimulated divergent and severe reactions, contrary to its very objective”.

“We are deeply saddened with the inadvertent stirring of emotions and withdraw this film keeping in mind the hurt sentiments and well being of our employees, partners and store staff,” the company said in a statement on Twitter.“So Hindutva bigots have called for a boycott of @TanishqJewelryfor highlighting Hindu-Muslim unity through this beautiful ad. If Hindu-Muslim ‘ekatvam’ irks them so much, why don’t they boycott the longest surviving symbol of Hindu-Muslim unity in the world – India?” tweeted Congress party’s member of parliament, Shashi Tharoor.

Many on social media also expressed their solidarity with Tanishq, a brand owned by Titan and promoted by the Tata Group in collaboration with the Tamil Nadu Industrial Development Corporation, and wished the company had not given in to the bullying.

Journalist Barkha Dutt posted a tweet, referring to an Indian company that has refused to advertise with Indian news channels that promote religious hatred and asked why Tanishq did not stand its ground.

“Rajiv Bajaj [promoter of Bajaj Auto] on one side and the surrender of Tanishq on the other. Difference between spine and supine,” Dutt posted. 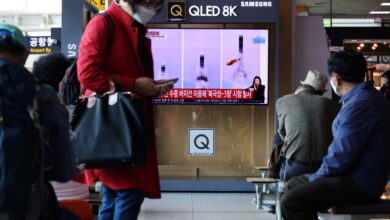 Zelenskyy’s envoy: We will not give up any inch of Ukraine’s lands to Russia