Arab media commentators have labeled Turkish President Recep Tayyip Erdogan a hypocrite and said his recent decision to convert the Hagia Sophia from a cultural site and museum back into a mosque plays into the hands of extremists.

The reconversion of the sixth century church into a mosque has widely been seen as an attempt by Erdogan to appeal to his nationalist and religious base. The president, who is losing popularity abroad for Ankara’s involvement in Libya and is facing an economic downturn exacerbated by the coronavirus, has been unapologetic and says critics are attacking Turkey’s sovereignty.

But Arab writers and academics have condemned the move, accusing Erdogan of hypocrisy based on his stance on other religious sites and suggesting he was appealing to extremists in the region. Western writers have similarily criticized the move.

Initial reactinos to the decision pointed out differences in Erdogan’s rhetoric in English and Arabic, suggesting that he was framing the move in different ways to different audiences for political gain.

“What the current Turkish government is doing under President Recep Tayyip Erdogan against the Arab world is a reflection of old Ottoman habits, rooted either in imperial dreams or the intention to economically drain states that have come under the sway of the Turkish Republic. It does so by taking advantage of the ideology of extremist groups and instigating intra-Arab conflicts, by arousing religious emotions that incite violence,” wrote Talal al-Torifi in an op-ed originally published in the regional Asharq al-Awsat media outlet. 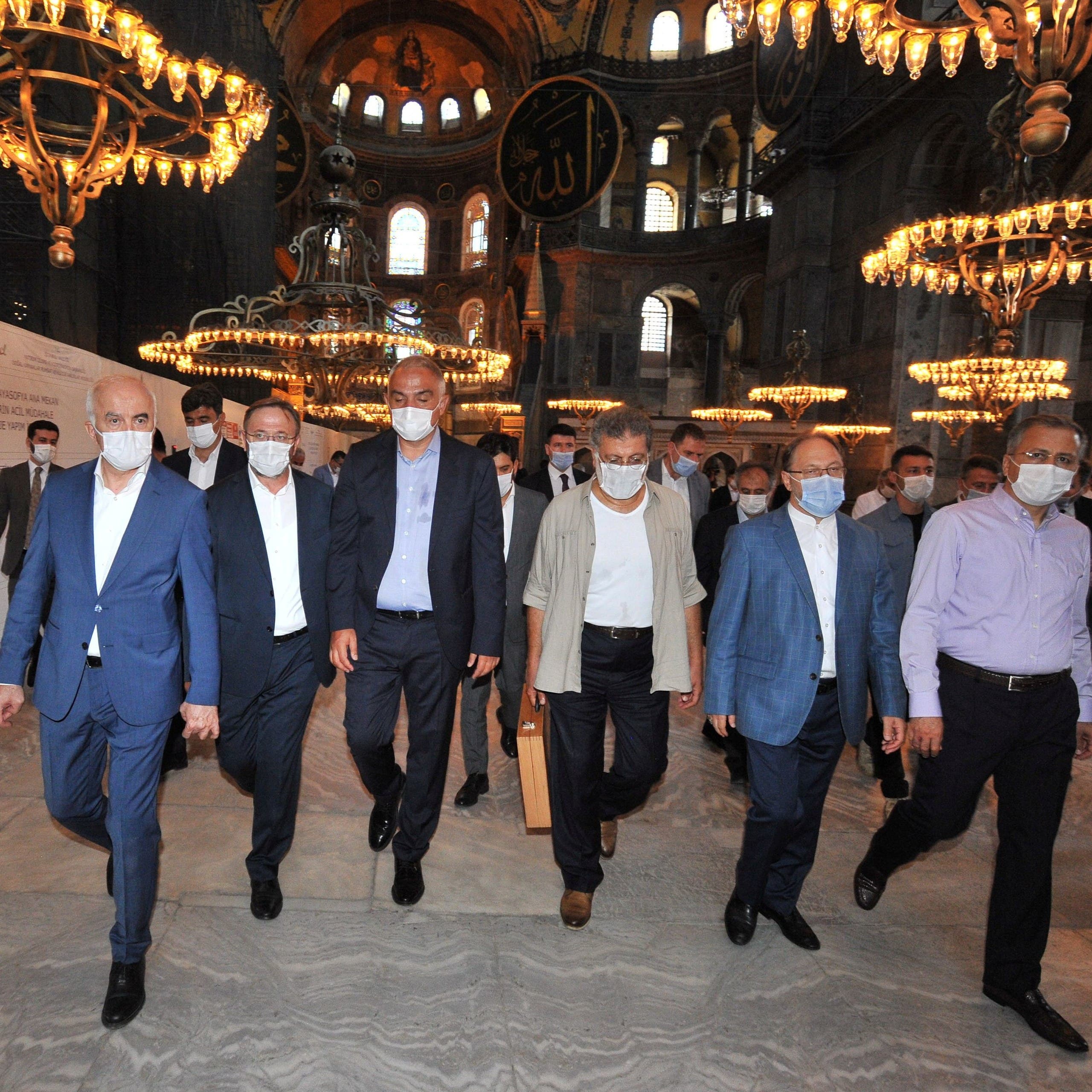 Al-Torifi added that the actions of the Turkish government that have a religious dimension “attempt to bolster support for its positions and portray it as a bastion of Islam.”

He furthered his argument saying that Islamic law and traditions says that Muslims should “live with others while respecting their religious rituals, places of worship and religious feelings.”

The caliphs who came after the Prophet Mohammed adopted a tolerant view whereby churches were protected and were not allowed to be occupied, demolished, nor taken away, al-Torifi wrote citing the Caliph Omar bin Khattab.

Another Arab commentator called out Erdogan’s hypocrisy in the decision to convert the religious site from a museum to a mosque, pointing to his opposition to Spain’s decision to turn a mosque into a cathedral.

Dr. Ziad al-Drees, former Saudi permanent representative to UNESCO, argued in an article published in Saudi Okaz newspaper that the Turkish stance is hypocritical after Turkey stood against Spain’s decision to turn the Great Mosque of Cordoba into a cathedral.

The Great Mosque of Cordoba was first thought to be a Roman temple that was converted to a church by Visigoths who seized the city in 572 A.D. When the Umayyads – the first Islamic dynasty – arrived, the religious site was then converted to a mosque.

Western countries that voiced condemnation of Turkey’s decision should equally be asked if they also condemned the Spanish position on the Great Mosque of Cordoba and expressed their “‘humanitarian’ stance” toward this “shared cultural symbol of humanity,” he argued.

Erdogan defended the move saying the country had exercised its sovereign right in converting it back to a mosque, saying the first Muslim prayers would be held on July 24. Erdogan has been accused of trying to undermine Turkey’s history of secularism and democracy in public appeals to religious populism.

“Turkey is a country where religion and nationalism intersect, so that many of the staunchly anti-Erdogan camp would back the principle of Turkish sovereignty over the monument,” Louis Fishman, a professor at Brooklyn College, told the Washington Post. “Upholding that prerogative absolutely would trump the debate of whether Hagia Sophia should be a museum or a mosque.”

Inside the holy site, Christian emblems remain from the building’s tenure as a cathedral, but Turkish officials have said they will not be removed and the site will remain open for Muslim and non-Muslims alike.

The Hagia Sophia, a 1,500 year-old religious complex, was built as an Eastern Orthodox cathedral in the sixth century A.D., and was briefly a Roman Catholic church before being converted to a mosque in 1453 when Mehmed II conquered the city for the Ottomans. It served as a worship place for Muslims until 1934 when Kemal Ataturk, the founder of modern, secular Turkey made it a museum. In 1985, UNESCO declared the place of worship a heritage site. 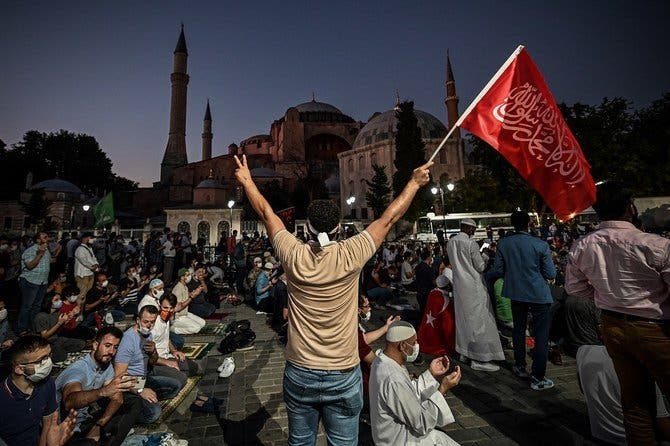 Last week a top Turkish court revoked the sixth-century Hagia Sophia’s status as a museum, clearing the way for it to be turned back into a mosque. (File photo: AFP)

There are five Byzantine churches by the name Hagia Sophia, which means Holy Wisdom in Greek, in Turkey. Over the last decade, four of these churches have been converted to mosques.

Calls for the Hagia Sophia to be returned to a mosque or cathedral began to gain traction in 2005.

Reaction from the rest of the world

UNESCO, alongside other religious groups and nations, condemned the move and their statement expressed concern that Turkey may modify the site in ways that threaten its state of conservation and has urged Turkey not to act without discussing its plans first.

Director-General of UNESCO Audrey Azoulay said: “[The Hagia Sophia] is an architectural masterpiece and a unique testimony to interactions between Europe and Asia over the centuries. Its status as a museum reflects the universal nature of its heritage, and makes it a powerful symbol for dialogue.”

While UNESCO can publicly shame Turkey for its decision, it has no authority to enforce its regulations, Evangelos Kyriakidis, director of the Chicago-based Heritage Management Organization, told Smithsonian Magazine.

The Pope said he was “very saddened” by Erdogan’s decision and Nobel-prize winning Turkish author Orhan Pamuk told BBC news that the decree may adversely affect Turkish people’s pride in their country’s status as a secular Muslim nation.

The head of Eastern Orthodox Church, Greece, and the Church in Russia, which is home to the world’s largest Orthodox Christian community, have all condemned the move. Greece said the move would have repercussions on relations between the two countries, as well as on Turkey’s ties with the European Union.

Meanwhile, the US State Department said it was “disappointed” with the move.

Former Obama secretary Castro drops out of 2020 US presidential race