The United Arab Emirates’ capital Abu Dhabi has banned movement in and out of the emirate, as well as between its cities starting Tuesday, as part of its mass testing efforts to curb the coronavirus outbreak.

The week-long ban was implemented to quickly reach as many people as possible to extend mass testing to high-density areas.

“Mass testing is a key pillar of Abu Dhabi’s strategy to contain the spread of COVID-19 through the National Screening Program,” Sheikh Abdulla bin Mohamed al-Hamed, chairman of the Department of Health, said in a statement.

Abu Dhabi police introduced a permit system for those exempt from the ban to be able to travel and move freely.

Who must comply with the ban?

Is anyone exempt from the ban?

Yes. Employees in vital sectors such as healthcare, as well as chronic disease patients who must visit hospitals for treatment, and “the transportation of necessary goods,” are all exempt.

If I am exempt, do I need a permit?

Yes. Abu Dhabi Police has issued a movement permit system to allow those who are exempt from the travel ban to move between the capital’s cities and out of Abu Dhabi during the week-long period.

Where can I apply for a permit?

Individuals can apply for a permit on the website launched by Abu Dhabi Police. https://es.adpolice.gov.ae/en/movepermit 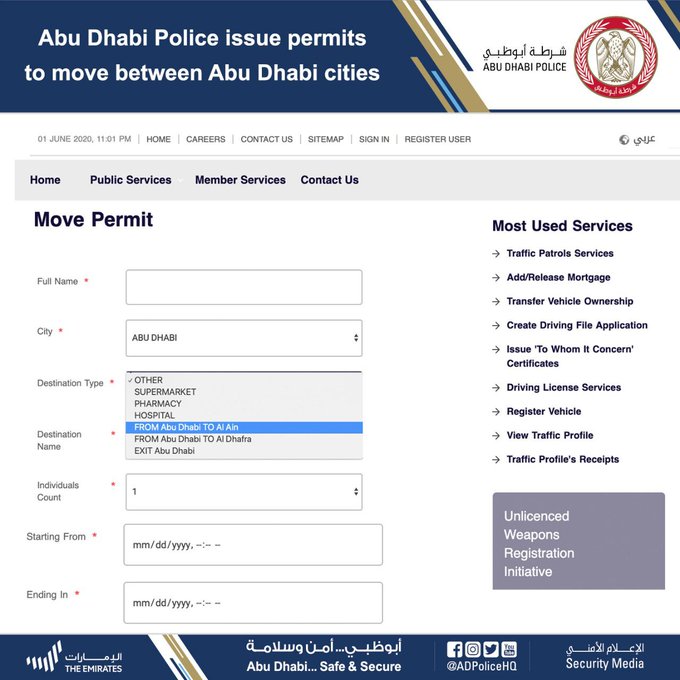 Am I allowed to leave my home during the week?

Yes. Residents are allowed to move freely within their city but must comply with precautionary measures such as social distancing and wearing a face mask while in public.

What about the National Sterilization program and nationwide curfew?

The nationwide curfew from 10 p.m. to 6 a.m. remains in effect, along with the travel ban. People are allowed to move freely within their residential region only outside of the curfew hours.

Will supermarkets and pharmacies remain open?

Am I still allowed to go to the mall, restaurants and hotel beaches?

Yes. Residents are still allowed to go to entertainment destinations such as malls, restaurants and beaches but only within their region. All individuals must wear a face mask and maintain social distancing. Business are required to implement precautionary measures as well.

The Department of Health began targeting high-density areas for mass testing and sanitation in which residents are tested and the area is sanitized. During testing times, commercial activities may continue as usual. However, entry and exit will be restricted, according to the health department.

Abu Dhabi Emergency and Crisis Committee for the Covid-19 Pandemic, in collaboration with Abu Dhabi Police and DOH, have announced a ban on movement entering & exiting the emirate and between its regions (Abu Dhabi, Al Ain, & Al Dhafrah) starting from Tuesday 2 June, for 1 week. 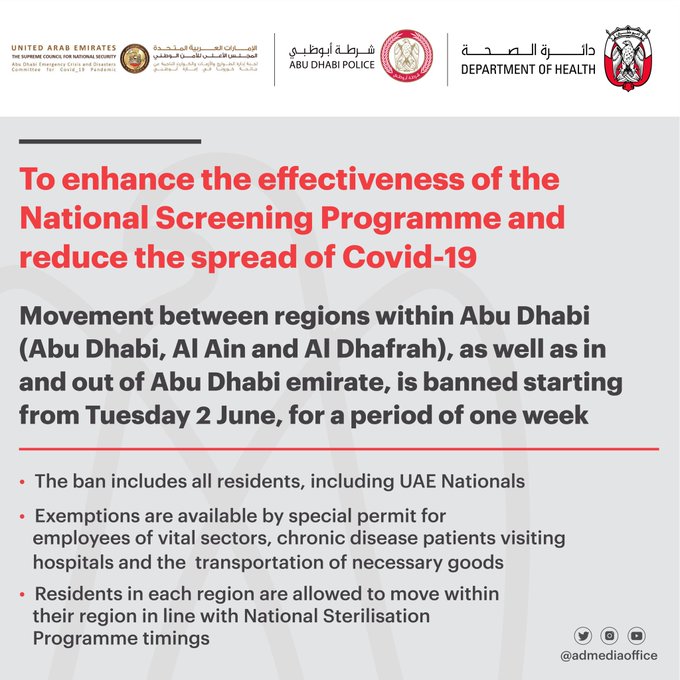 102 people are talking about this

Authorities assured those with expired visas that no legal action will be taken against them.

“Protecting the community’s safety and curbing the spread of coronavirus is the top priority,” the Department of Health said in statement.

The UAE has been easing restrictions over the past several weeks, including reopening entertainment destinations as well as beaches and malls, and allowing businesses to resume activity with the requirement of implementing preventative measures.

The country has so far confirmed 35,192 cases and 266 fatalities. However, 18,338 people in the UAE have recovered from the virus so far.

A brief history of previous Palestine peace deals – and their failure

More than 26,000 dead due to coronavirus in Iran, says opposition group MEK