In the weeks leading up to the Taliban’s takeover of Afghanistan, a journey to the United States through perilous checkpoints, sleepless nights and multiple flights was largely unimaginable for the thousands of Afghans now living at Fort McCoy military base.

But as the Taliban captured the country’s capital, Kabul, in mid-August, getting onto departing American flights became the best hope for survival for countless Afghans who feared retaliation from the group.

Now, weeks after the hurried and chaotic evacuations, Afghan families find themselves in an unfamiliar place thousands of kilometres from home.

Al Jazeera spoke to several Afghans* at Fort McCoy, an expansive US military base in western Wisconsin where they are awaiting immigration processing before being released into host communities across the country. The facility housed more than 8,000 Afghans in early September.

Here, they recount how they escaped from Afghanistan and share their hopes for the future, as well as their desire to help and reconnect with loved ones in their homeland.

As reports of revenge killings in Taliban-controlled areas spread, he says he and his family had no choice but to flee. The Taliban has promised to not seek retaliation against Afghans who worked with the government or US forces.

“I was panicking. On the one hand, I felt like I needed to go, but I was feeling so sad to be leaving my country and my family,” he told Al Jazeera.

Abdul’s panic grew as his nine-year-old son fell ill while the family was trying to reach the airport in Kabul. He said his initial attempts to reach the compound failed because Taliban fighters at checkpoints near the airport simply pushed people back and denied them passage.

With time running out, he said he had to leave his sick child with his parents in the capital and try to reach an airport gate guarded by American and Afghan forces. “That is my biggest sadness,” said Abdul, of having to leave his son in Afghanistan.

Eventually, Abdul, his wife and two younger children spent three sleepless nights at the northern entrance of the airport. Abdul had not applied for the Special Immigrant Visa (SIV) programme available for Afghans who worked with the US. At the airport gate, he showed proof that he worked with Afghan security forces, and American forces let him in.

Once inside, they took his biometrics and he was approved for evacuation. Abdul and his family were flown to Doha then to Ramstein, a US air base in Germany, before being transferred to Fort McCoy. While the conditions were not ideal during the journey, Abdul said his family was relieved to have succeeded in leaving Afghanistan.

Abdul also thanked American forces, crediting them with saving his life. “I’m fully committed to following the rules and the laws of this country in the future,” he said, adding that his top priority is to bring his son to the US – and then also his brother and two sisters. “We want to be self-sufficient and find a job,” Abdul said.

Hashima: ‘Everyone wants a good life’

Hashima, 23, was studying international relations at a private university in Kabul before the Afghan government collapsed.

She said she had no immediate plans to leave the country before the Taliban captured Kabul, but with two family members who worked with American forces, she felt she had to flee.

She first headed to the airport in Kabul, but with large crowds at the gates, Hashima was not able to reach the compound. Her brother, who worked with the US military and fled Afghanistan to China, instructed her to head to the northern city of Mazar-i-Sharif to catch a flight, she said.

“We went to Mazar and waited for two days over there, then we were put on a flight to Qatar,” she said. But Hashima, who has no children, had to leave her husband behind.

“My husband’s name was not in the list of evacuees, so I had to come alone,” she said. “It is because this all happened all of a sudden, and my brother had not submitted my husband’s name in his SIV case yet.”

She said she feels “happy and relaxed” at Fort McCoy, but her main focus is to help bring her husband to join her in the US. “He was working with an American company. He is really under the threat by the Taliban. The Taliban has come to our house and checked to find my husband, but he is not staying at home,” she said.

Hashima added that fears for her husband’s safety, in contrast with her effort to be happy in her immediate surroundings, has left her feeling “confused”.

“Everyone wants a good life,” she said.

“I grab my pen and my notebook these days here, sit in the shade of a tree and write down my plans for my future here. I write my wishes and goals. I want to be the representative of the Afghan people here in America. I wanted to have the full freedom to reach my goals.” 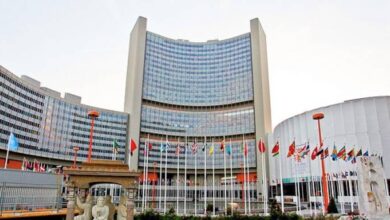