“I do not want to live any more,” says Olga, a Ukrainian “babushka” (grandmother), as she prepares to celebrate her 89th birthday.

“I will turn 89 on January 2, but I would prefer to be dead,” she told Al Jazeera, with a traditional headscarf wrapped over her head.

Olga lives on the front line in eastern Ukraine, in the town of Marinka, near the Russian border.

This is government-controlled territory, close to the so-called “contact line”, which divides it from the separatist regions of Donetsk and Luhansk.

Shootings have been reported here in recent weeks and, according to Ukraine’s Defence Ministry, machine-gun fire and mortar shelling have been documented nearby in November and December.

Olga can hear shooting every night.

“I cannot sleep. The war has been going on for more than seven years. It calmed down, but now, I hear the bullets fly above my house every night. I wish my life was over.”

Olga’s house is surrounded by signs warning of snipers and landmines.

The war that broke out in eastern Ukraine in 2014 has killed more than 14,000 people according to Kyiv and caused an enormous displacement crisis, leaving only the most vulnerable people living in the war zone.

According to Srdan Stojanovic, the head of the EU Humanitarian Aid office in Ukraine, 3.4 million people needed humanitarian assistance in 2021.

As the conflict continues without an end in sight, even amid top-level talks, Russian President Vladimir Putin stands accused by the West of amassing more than 100,000 servicemen next to Russia’s border with Ukraine.

He says it is Moscow’s right to place troops where it wants on Russian soil and denies allegations of a planned invasion. Russia meanwhile alleges that NATO is expanding eastwards and fears the alliance is growing ever closer to Ukraine.

As accusations fly across borders from presidential offices, security incidents have intensified since November.

On November 13, Masha*, a 15-year-old schoolgirl, was sleeping at her grandmother’s house in the village of Nevelske – also in the government-controlled area, when she was awakened by the sound of shelling.

The entire village was destroyed. No deaths were recorded, but dozens of people, including Masha and her grandmother, were evacuated.

The teenager now lives with relatives in a nearby village, a couple of kilometres away.

“But even now, I can hear shelling every night. It wakes me up. I come to school tired every morning.”

For Nastya*, 16, the fighting she can hear near Nevelske brings back painful memories from when the war began.

“Most children we support live within 5km (3.1 miles) from the contact line and hear shelling on a weekly or daily basis,” she said.

“Children do not feel safe while being home at night and while going to school. Access to underground shelters during shelling also varies in different settlements.”In the village of Novomykhaivka, about an hour’s drive from Pervomaiske, residents are used to the presence of landmines and shelling.

Alexandra and Ivan, 87 and 89 years old respectively, say they feel “heartbroken” whenever they hear the sound of shelling.

They recalled an incident at the beginning of the war when their only son barely survived after their house was hit.

“These days, we hear heavy shelling from the village of Pisky because we live on the other side of the same field,” said Alexandra.

Their house is near the village of Vodiane, on the contact line.

In late November, Pisky was hit by shells and bullets. Ivan and Alexandra heard the attack from their house.

“They shelled our friends’ houses; they even destroyed their toilets. People had to spend the night hiding in the basement. We recalled the day our son almost died there, and we were terrified,” they said.

“We are illiterate, we survived the Second World War and the Soviet famine in 1947. We thought we were not afraid.

“But right now, we pray every night before we go to bed, and then pray in the morning again because we are happy to be alive.” 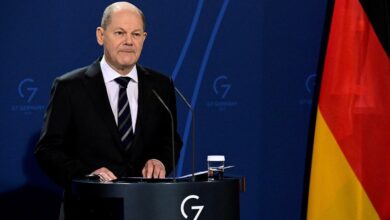