About 1,000 protesters gathered outside Israeli Prime Minister Benjamin Netanyahu’s official residence in Jerusalem on Saturday night, pressing ahead with their months-long campaign demanding his resignation.

A mix of grassroots groups have held the weekly protests, saying Netanyahu should step down while he is on trial for corruption and because of his handling of the coronavirus in Israel. After two lockdowns this year, the nation’s economy is struggling, and hundreds of thousands of Israelis remain out of work. Many protesters are Israelis who have lost their jobs.

After six months of demonstrations and with wintry weather setting in, the protest crowds have started to shrink. But participants remained vocal and animated Saturday. Nearly all wore masks, though not everyone observed social distancing.

Many held Israeli and pink flags, one of the symbols of the protest movement. Others hoisted model submarines, a reference to a scandal over an Israeli purchase of German submarines in which several Netanyahu associates have been implicated. Netanyahu has not been named as a suspect in that case, though his rival, Defense Minister Benny Gantz, ordered an investigation into the affair this week.

Smaller protests also took place at junctions and overpasses across Israel, and at Netanyahu’s private home in the upscale coastal town of Caesaria. 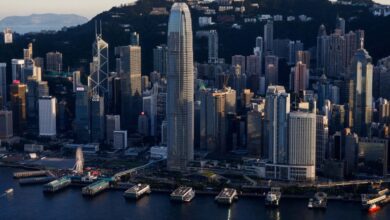 Israel ‘not necessarily’ behind all Iran nuclear site incidents: Gantz