Common wisdom has long held that each dog year is equivalent to seven human years. But a new equation developed to measure how a dog ages finds the family pup may be a lot older than we realize.

The findings, published recently in the journal Cell Systems, calculate that a 5-year-old dog would be pushing 60 in human years.

“Puppies age super quickly,” said Trey Ideker, the study’s senior author and a professor of genetics at the University of California, San Diego, School of Medicine. “By the time a dog is a year old, at a molecular level, he’s much more like a 30-year-old human. Retrospectively, we did know these things. It didn’t make any sense that the equivalent to a 7-year-old human would be able to have puppies.”

Ideker and colleagues noticed that dogs, just like humans, have chemical marks on their DNA, called methylation marks, that change with age.

“The genome itself doesn’t change with age,” Ideker said. “What does change is marks on the genes that control a dog or human’s growth pattern.”

The methylation marks, or as Ideker calls them “wrinkles on the genome,” change in predictable ways as we and dogs age.

“We are able to quantify this at the molecular level and tell how fast someone is aging, and we can align it across dogs and humans,” Ideker said. “But we don’t know exactly what it all means.”

When they compared the dog DNA data to information from humans, the researchers came up with a new equation to figure out the dog’s comparable human age.

For iPhone calculators that have the natural logarithm, or “ln,” function, first type in the dog’s age. Then hit the “ln” button. Multiply that result by 16; then add 31.

If you’re using Google’s scientific calculator: First, hit “ln,” then type in the dog’s age, then equal it out. Next, multiply by 16, and then add 31.

By this time, dog aging has slowed down, so an 8-year-old dog is like a 64-year-old human.

According to this equation, the average 12-year Labrador lifespan is equivalent to a human living to about 70.

Ideker suspects there will be some variation based on dog breed but that they will all follow a similar pattern.

The new dog-age math has given Ideker some pause when he thinks about taking his own dogs on runs: He now realizes his 6-year-old dog is actually pushing 60 in human years.

Margret Casal, a specialist in veterinary genetics, said the new calculations match what she’s observed in her dog patients.

“It validates what a lot of other researchers have been saying,” said Casal, a professor of medical genetics, pediatrics and reproduction at the University of Pennsylvania School of Veterinary Medicine.

Researchers knew the 1-to-7 comparison was off, but they did not know what the specific relationship was, she added.

“It will be interesting to look at different breeds,” Casal said. “We know that some smaller breeds live longer and some larger ones don’t live quite as long.”

For owners hoping to help a beloved dog live as long as possible, Casal offered a few tips:

“That’s really important,” Casal said. “I can say as an owner of a dog, sometimes you don’t see something is wrong and your vet might be able to see it better.”

Get Ready to See The Giant Supermoon! Billions in aid needed to help Afghan children in 2021: NGO 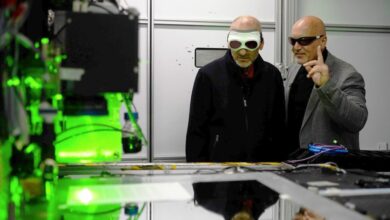 Nails Linked to The Crucifixion of Christ Have Fragments of Ancient Bone, Wood – Scientists Claim

Young Saudi Takes Her Pet Cheetah For a Stroll