Ruth Bader Ginsburg’s final weeks have been described by friends and relatives, who told of her remarkable vigor, and their shock at her death on Friday.

Ginsburg, who died at the age of 87, was still seeing family, exercising, listening to opera and working right up until her death.

She even officiated at a wedding.

Those who had been in touch with Ginsburg or her staff recently said she seemed to be coping with treatment for cancer and also making plans for events months away.

Mary Hartnett, one of her two authorized biographers, visited Ginsburg in mid-August at her longtime home in the Watergate apartment complex next to the John F. Kennedy Center for the Performing Arts in Washington.

She told AP that Ginsburg was ‘plowing ahead’ despite a cancer recurrence.

‘She was trying very hard to treat this, and essentially her body just gave out,’ Hartnett said.

Hartnett, who wore a mask and tested negative for the coronavirus before visiting, said the justice was continuing to do court work.

She also exercised, working out on a treadmill or using a tape made by her longtime trainer, Bryant Johnson.

In the evenings, she’d watch Live at the Met operas, Hartnett said.

Hartnett said she had asked the justice whether there were any silver linings to her illness and to the coronavirus pandemic.

‘She immediately lit up and said: “Yes, I’ve had so much time with my family, and they have been wonderful,”‘ Hartnett said.

Ginsburg announced in mid-July that she was receiving chemotherapy treatments – the fifth time she had dealt with cancer since 1999.

‘I have often said I would remain a member of the Court as long as I can do the job full steam. I remain fully able to do that,’ Ginsburg said at the time.

But it was hard for the public to gauge how sick Ginsburg was.

She started receiving chemotherapy in May, four months before she revealed it publicly and at a time of year when the justices typically take the bench at least once a week to announce decisions.

But because of the coronavirus, the justices were hearing arguments by telephone and out of the public’s eye.

In late August, however, one photo of her became public. It was a joyous image, Ginsburg wearing a black-and-white embroidered collar and black judicial robes as she presided over an outdoor wedding in the Washington area.

The picture from August 30, which was posted on bride Barb Solish’s Twitter account, suggested that Ginsburg was soldiering on.

Also this summer Ginsburg would have been engaged in the work of the court.

The justices handle some emergency matters over the summer, and Ginsburg would also have been preparing for an extended private conference the justices hold at the end of September and before the start of the term in October.

Betsy West and Julie Cohen, who co-directed the 2018 documentary ‘RBG’ about Ginsburg´s life, said they got an email from her in mid-August signed in her typical fashion: RBG.

But on Friday, longtime friend Nina Appel got a call from Ginsburg’s son James.

He told her that his mother had died just before sundown. He did not want her to hear the news first on television, she said, adding that she was grateful for the call.

The court said she died surrounded by family at her home in Washington.

Appel, the former dean of Loyola University Chicago´s law school who was friends with Ginsburg for over 60 years, said the news was a ‘terrible shock’ and caught her off guard.

She said she would remember her friend not only as a brilliant jurist but also as someone who connected with young people.

‘She was always herself. She didn’t pretend to be anything other than who she was,’ she said.

Ann Claire Williams, a former federal appeals court judge and Ginsburg’s friend, said she’d been in touch with Ginsburg’s office over the summer to reschedule a public talk they’d planned for the fall and then pushed off to 2021.

‘As recently as, say, two months ago she was looking ahead to next year, so even though we knew she was ill we didn’t expect it to come to an end at this point,’ Williams said.

A day before she died, Ginsburg was honored by the National Constitution Center with its Liberty Medal.

The center’s president, Jeffrey Rosen, said in the opening to the video ceremony that Ginsburg was ‘watching at home.’

The nearly hour-long video included some of Ginsburg’s favorite opera singers and celebrity friends who addressed her directly.

Ginsburg sent a note the center made public.

It closed by sending ‘bravissimos’ to the ‘participants in this event, and all in attendance for lifting my spirits sky high.’ The Somali general fighting al-Shabab and the patriarchy

‘Last of The Magicians’: Isaac Newton’s Notes on The Pyramids Unlock Secrets of The Universe 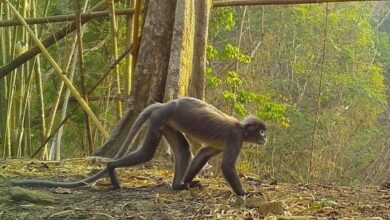