After authorities extended the Lunar New Year holiday by 10 days in an attempt to contain the new coronavirus outbreak that has killed more than 900 people and infected more than 40,000, most provinces in China ended the official holiday on Monday.

However, amid concerns of a potential uptick in cases as people return to work, the official ending of the holiday did not lead to the widespread reopening of businesses as the entire country has remained on high alert.

Most companies that can function with staff working remotely have told employees to work from home. Firms that require face time with staff have to obtain permission from local governments in order to reopen their businesses.

In the latest notice issued by the State Council, the government encouraged companies to summon their employees back to work in time-staggered batches, to avoid a bulk of people showing up at the same time.

Start Here: Confused about the Coronavirus? (7:15)
Anxiously waiting
Angxi Zou, a lawyer who works at a law firm in Chengdu, said his firm had already extended the holiday four times, most recently on Monday, since the beginning of the outbreak.

“We were originally supposed to go back to work on January 31, but then it got pushed back to February 3, and then again until February 10,” Zou said. “And again, yesterday my company told me that the date had been further postponed until February 17.”

Zou is not alone. Across China, large companies such as Tencent, the parent company of WeChat, the biggest online messaging app in China, have extended their holiday until February 17 as well.

“I have been working from home for a week now, and it looks like I’m stuck here for at least another week,” Cecilia Young, an app developer at a Shenzhen-based tech company, said.

For employees who have returned to office, minimising the risk of transmitting the virus has been a key priority: Staff are taking turns to go to the canteen, companies are avoiding holding meetings and masks are a must.

“We try our best to make sure this virus doesn’t get transmitted further, but sometimes you can’t help worrying: what if I caught the virus on the subway? Or what if I touched something with the virus on it and then touched my face?” said Yuzhu Zhao, a financial analyst who works at a securities company which called its employees back to the office on February 10.

However, the majority of the workforce in China is employed in informal sectors, such as construction. Many of those workers have struggled since their daiy income dried up and are anxiously waiting to return to work.

According to the notice issued by the State Council, only the “businesses essential to the welfare of the general population” are allowed to reopen. That includes construction work for public institutions, such as hospitals, medical equipment manufacturing factories, and express delivery. As such, the vast majority of the informal sectors and small businesses remain closed. 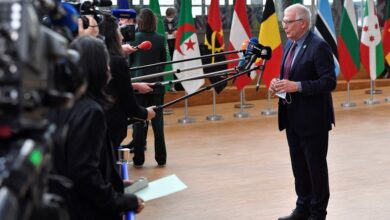 ‘It will get very bad’: Experts warn on Indonesia COVID surge