Hezbollah has begun to back several charitable initiatives that target low-income households as Lebanon’s economy continues to crumble.

These have taken the form of cooperative grocery shops known as Makahzen Nour, and the Iran-backed political party and militia has also started giving direct aid to low-income families. Hezbollah is also expanding Qard al-Hasan, a financial institution providing microloans to its popular base.

Hezbollah has been hurting financially, and when popular protests erupted in 2019, prior supporters of the group began to criticize it. When the novel coronavirus pandemic broke out in March, Hezbollah stepped up its public relations efforts to combat the virus, but its fighters said they received less support from the organization.

Faced with increased popular criticism for its corruption and mismanagement along other Lebanese political factionser the last few years, the party is seeking to provide for its supporters and poor Lebanese families.

In Beirut’s southern suburbs, known as a Hezbollah stronghold, the group has opened Makhazen Nour.

Al Arabiya English attempted to visit one of the cooperatives on the corner of a gated alley in the Roueiss southern suburb, but was told by a Hezbollah militant guarding the entrance that the cooperative is only accessible “to customers holding a discount card provided by the party as well people accompanying them.” 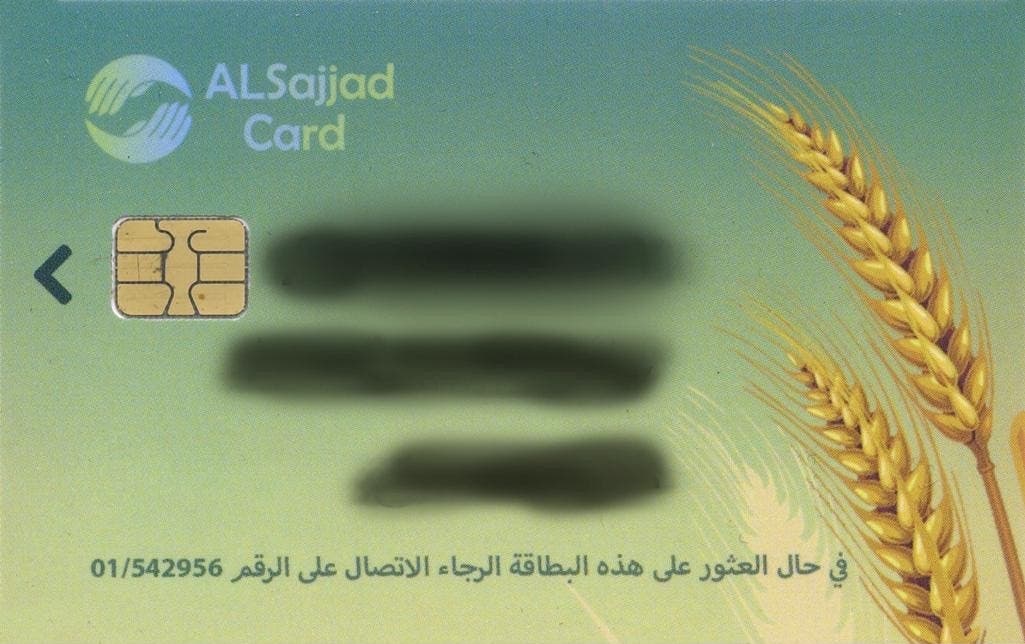 The Al Sajjad Card is distributed to low-income families in Lebanon and grants families access to Hezbollah-run supermarkets. (Photo courtesy of Mona Alami)

The cooperative is located behind Hezbollah’s Martyr’s square, colloquially known as Moujamaa al-Shuhada, where Hezbollah’s leader Hassan Nasrallah speeches are transmitted on a regular basis to party supporters.

According to an article by local media outlet Janoubia, the cooperative has opened branches in different areas, including Kfadajal and Wadi Jilo in the south, Baalbek and Bednayel in the eastern Bekaa Valley, as well as the one in Roueiss.

“There are two types of cards, one labeled Nour attributed to Hezbollah fighters and another called Sajjad, which is distributed to low-income families,” journalist Ali Amine said.

The cooperative sells furniture, foodstuff and other household items. Most of the merchandise comes from Iran, he added.
Looking at food items sold by Makhazen Nour, most were made in Iran and some in Lebanon.

According to a source close to Hezbollah’s commanders who spoke to Al Arabiya English on condition of anonymity, Hezbollah is also providing direct aid to low-income families in the south of Lebanon, regardless of their political affiliations.

“They are now targeting poor households where both parents are unemployed,” the source said.

Since 2019 Lebanon has faced an unprecedented economic and financial meltdown. The Lebanese pound has lost over 80 percent of its value, and now nearly half of the population lives below the poverty line. 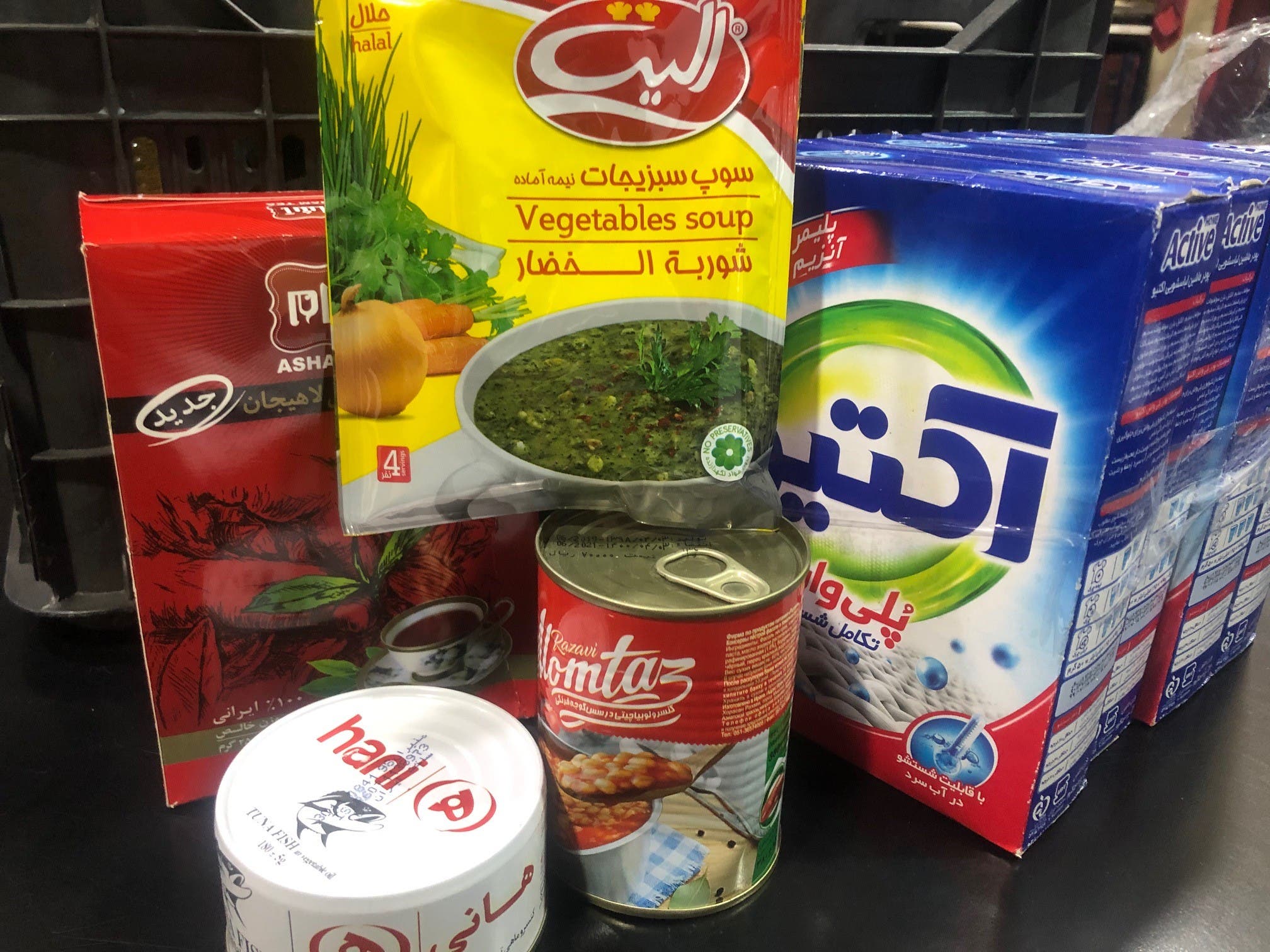 Iranian goods are shown in a Hezbollah-run supermarket in Lebanon. (Photo courtesy of Mona Alami)

Lebanese are struggling to buy basic goods with soaring inflation of over 112 percent, and unemployment surging past 30 percent.

Hezbollah has also expanded another of its charitable ventures known as Qard al-Hasan in the wake of the crisis. The financial organization, which provides interest free microloans and is not subject to the Lebanese monetary and credit law employs nearly 500 people and has around 30 branches across the country, according to an article published by Lebanese business publication Le Commerce du Levant.

“My husband stopped working and my salary was too low to settle my daughter’s medical needs. I gave my jewelry as a collateral and was able to take a $500 loan,” said a client of Qard al-Hasan speaking to Al Arabiya English on condition of anonymity.

Qard al-Hasan has been sanctioned by the US Treasury since 2007, and according to its website it operates in accordance with the principles of Islamic finance.

According to its website, the institution has more than 406,000 contributors and over the years has given out over $3 billion, as of the end of 2019.

Microloans are capped at $5,000 (in “fresh dollars,” or dollars not trapped in the current Lebanese banking system) and are repayable over a maximum period of 30 months. According to Le Commerce du Levant, it allocated over 200,000 microloans in 2019 alone, totaling $500 million.

These type of loans are politically beneficial to Hezbollah as they help strengthen the group’s influence and control over the country’s Shia community, especially with the prevailing catastrophic economic situation in Lebanon, Joseph Daher, the author of “Hezbollah: Political Economy of the Party of God” told Al Arabiya English.

“The Qard al-Hasan institution is part of Hezbollah’s network of organizations and associations falling within the party’s strategy of political domination. In the context of the economic crisis and the rise of poverty in Lebanon, and for lack of a political alternative, the Shiite popular classes, like other popular segments in the country, are forced to ask for the help [of parties] and their dependence on dominant faith-based parties, such as Hezbollah, will strengthen,” he said.

As Lebanon’s crisis deepens, the state also becomes weaker, and Hezbollah has found a way to fill gaps where the state cannot.