Lebanon’s Hezbollah said Friday it had filed slander lawsuits against an ex-parliamentarian and a political party who allegedly claimed the Shia movement was responsible for the Beirut port blast.

The explosion of hundreds of tons of ammonium nitrate fertilizer at the Beirut port on August 4 was Lebanon’s worst peace-time disaster.

It killed more than 200 people, wounded at least 6,500 others and ravaged large swathes of the capital.

Lebanon has launched a probe into the disaster, but no conclusions on responsibility have yet been reached.

Accusations have swirled, however, in some media and on social networks alleging Hezbollah had considerable control over port activities, or was making use of the highly-explosive fertilizer.

“The accusations directed at Hezbollah over the port blast are false and constitute a real injustice,” Hezbollah lawmaker Ibrahim al-Moussawi said.

The movement has filed lawsuits against former independent parliamentarian Fares Souaid and the website of the Christian Lebanese Forces party over such allegations, he said.

Speaking to reporters outside the judicial court in Beirut, the Hezbollah MP said the Shiite movement would file more lawsuits in the future.

“We have assigned a group of lawyers to file lawsuits with the judiciary to pursue all those who have practiced deception, falsification, slander and false accusations,” he said.

Souaid and the Lebanese Forces are both opposed to Iran-backed Hezbollah, the only side not to have disarmed armed after the 1975-1990 civil war.

Hezbollah is labeled a “terrorist” group by several Western nations.

But it is also the most powerful player in Lebanese politics and holds seats in parliament.

Lebanon’s government resigned after the August explosion but remains in a caretaker capacity, while talks on forming a new one have hit a wall.

A investigation into the blast launched by Lebanese authorities has led to the arrest of 25 people, including top port and customs officials.

Lebanon is mired in its worst economic crisis in decades, increasing the poverty rate to more than half the population. Why Malaysia’s 2022 election is so difficult to predict 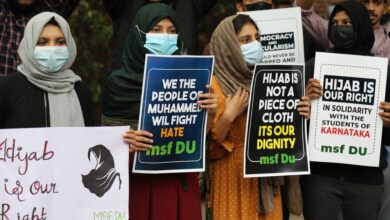