Harvey Weinstein accuser Rosanna Arquette is among the chorus of celebrities slamming the shock decision to release Bill Cosby from prison, saying her ‘heart and soul’ is with his victims.

The 83-year-old disgraced comedian was released from prison on Wednesday just hours after Pennsylvania’s  Supreme Court threw out his sexual assault conviction.

Cosby had served nearly three years of a three to 10-year sentence after being found guilty of drugging and violating Temple University sports administrator Andrea Constand at his suburban Philadelphia home in 2004.

He was the first celebrity tried and convicted in the #MeToo era. 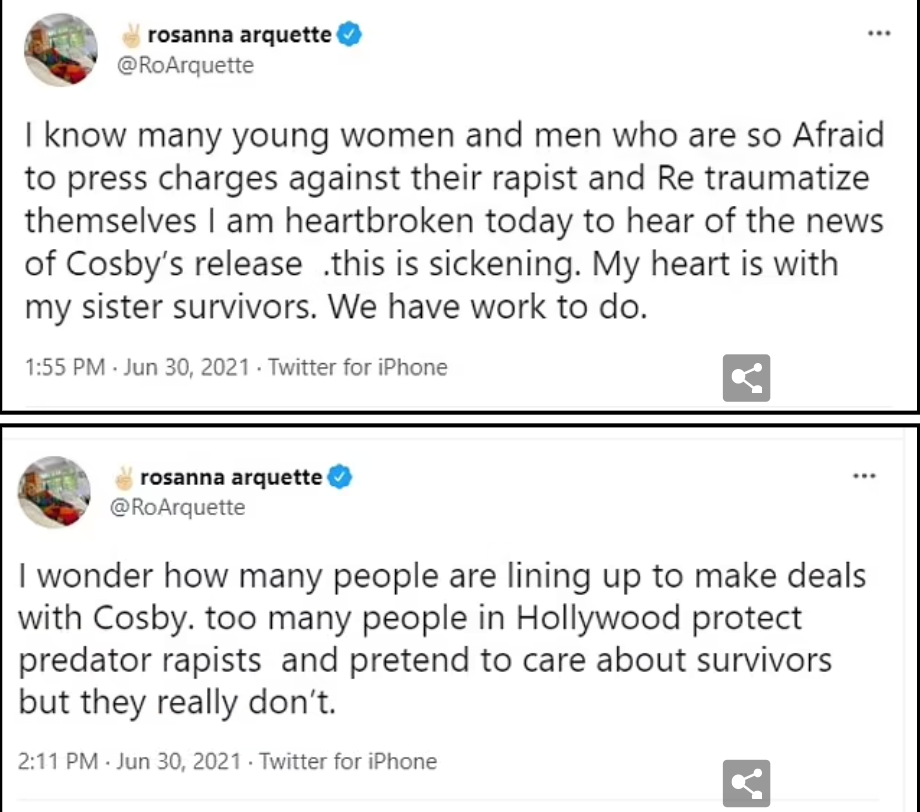 The decision to overturn his conviction was based on how a former prosecutor had promised Cosby he wouldn’t be charged back in 2005 and lulled him into incriminating himself.

The news sent shockwaves across the country with a number of celebrities and Hollywood figures slamming the decision.

Rosanna Arquette, who was one of the first actresses to come forward to accuse Harvey Weinstein of assault, fired off a series of tweets.

‘I know many young women and men who are so afraid to press charges against their rapist and re traumatize themselves I am heartbroken today to hear of the news of Cosby’s release. This is sickening. My heart is with my sister survivors. We have work to do.

‘Bill Cosby is STILL an evil rapist. The end.’ 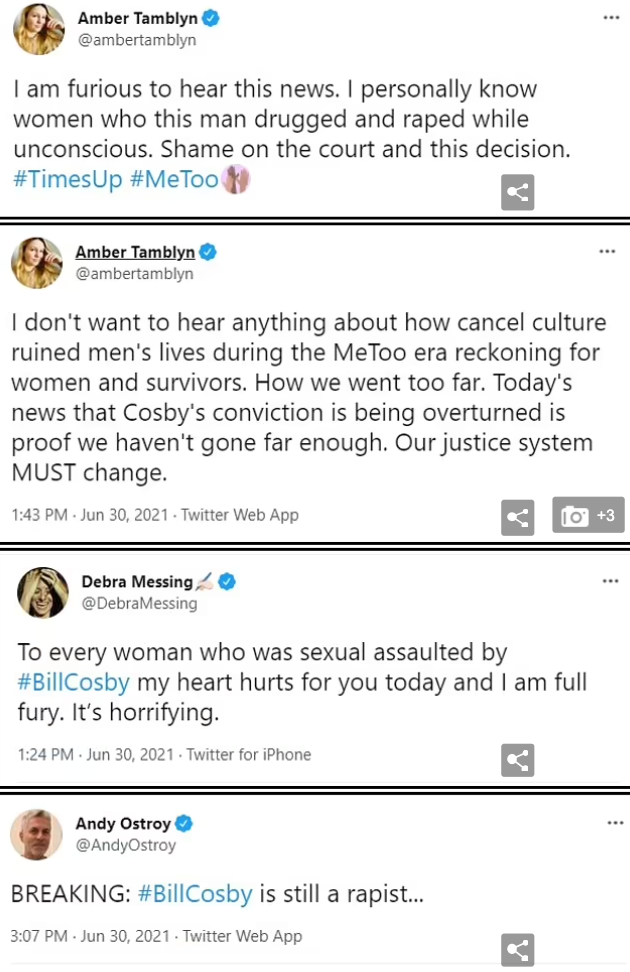 Sisterhood of the Traveling Pants actress Amber Tamblyn tweeted: ‘I am furious to hear this news. I personally know women who this man drugged and raped while unconscious. Shame on the court and this decision.’

She added in another tweet: ‘I don’t want to hear anything about how cancel culture ruined men’s lives during the MeToo era reckoning for women and survivors. How we went too far. Today’s news that Cosby’s conviction is being overturned is proof we haven’t gone far enough. Our justice system MUST change.’

Mrs Doubtfire screenwriter Randi Mayem Singer said: ‘We live in a world where Britney Spears has people controlling her uterus, but Bill Cosby is free. Got it.’ 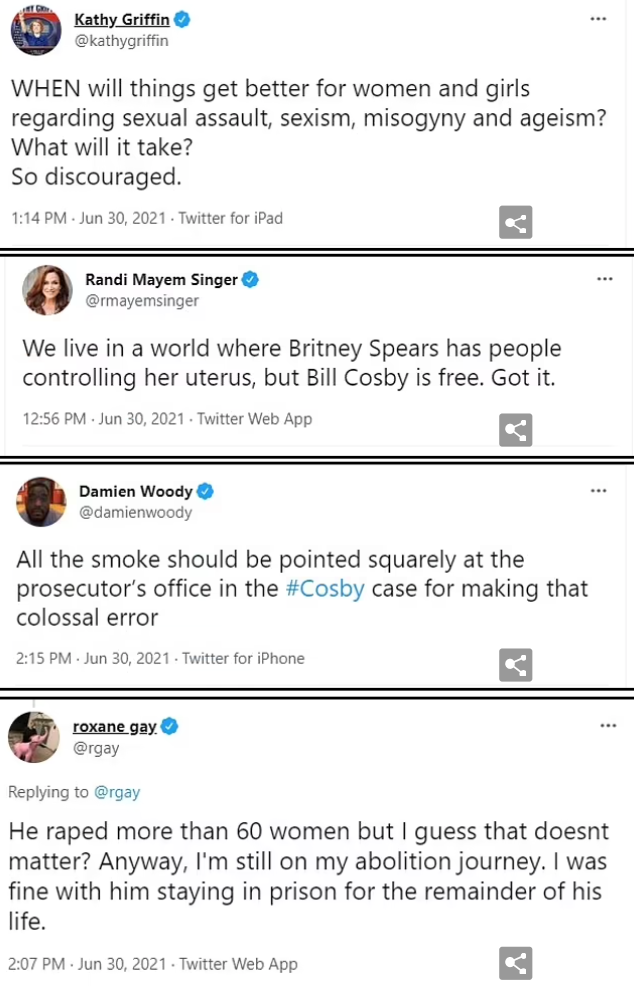 Others took aim specifically at the prosecutor and Supreme Court for overturning the decision.

Author Keith Boykin tweeted: ‘The 5th Amendment is an essential tool to protect the rights of the powerless in America against the powerful. Please don’t blame the Constitution for the Bill Cosby decision. Blame the prosecutors who violated the Constitution.’

NFL veteran Damien Woody said: ‘All the smoke should be pointed squarely at the prosecutor’s office in the #Cosby case for making that colossal error.’ 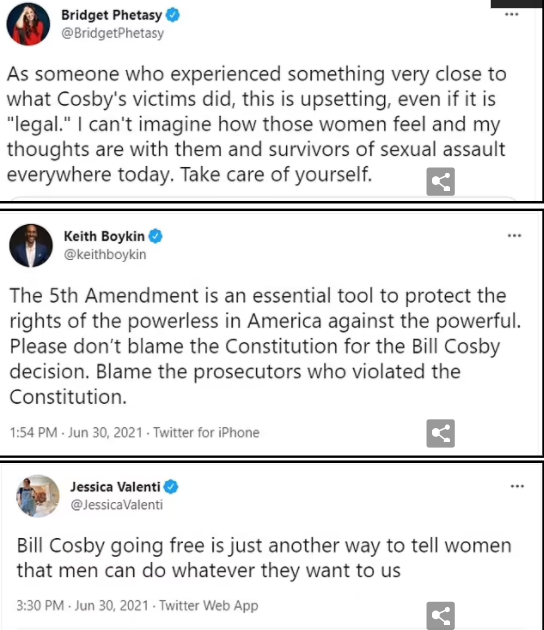 Author Roxane Gay tweeted: ‘He raped more than 60 women but I guess that doesn’t matter? Anyway, I’m still on my abolition journey. I was fine with him staying in prison for the remainder of his life… And yes, the prosecutors are responsible for this. They can have some of this smoke, too.’

Comic and journalist Bridget Phetasy tweeted: ‘As someone who experienced something very close to what Cosby’s victims did, this is upsetting, even if it is ‘legal.’ I can’t imagine how those women feel and my thoughts are with them and survivors of sexual assault everywhere today. Take care of yourself.’

‘I Didn’t F***ing’ Write it”: Lewis Capaldi’s Speech Gets Censored by Bosses

Adam Lambert to Star in “Ratatouille: The TikTok Musical”