Palestinian-Dutch model Bella Hadid took to social media this weekend to celebrate her father, real estate mogul Mohamed Hadid, on his birthday via a series of thoughtful Instagram Stories.

The 24-year-old penned a heartfelt tribute to her father, who turned 72 on Friday, and took the opportunity to open up about her Palestinian roots.

The birthday tribute began with a series of adorable throwback photos from her childhood. “Happy birthday to my baba!” she captioned the first image. “I always loved to be with you,” she wrote in the second photo.

The catwalk star went on to share a more recent image of the duo in the kitchen, cooking up what appears to be a selection of Arabic dishes such as fatayer and falafel. “I love learning how to cook Palestinian food with you,” Hadid captioned the photo. “Thank you for teaching me about our culture. I love Palestine and you so much.”

She added: “Your roots will forever be intertwined within our family line. It’s my favorite part about us.”

The part-Arab model, who is half Dutch by way of her mother Yolanda Hadid, has always been vocal about her Palestinian roots.

In July, she called out Instagram for removing an Instagram Story in which she said how proud she was of her father’s Palestinian heritage. The supermodel shared an image of her father’s long-expired US passport, which states his birthplace as Palestine. “Proud to be Palestinian,” she captioned it.

Shortly afterwards, she received a notification from the photo-sharing platform to say that the content went against its community guidelines on “harassment and bullying.”

Sharing a screenshot of the removal notification, she wrote: “Are we not allowed to be Palestinian on Instagram? This, to me, is bullying.”

The extremely-vocal Hadid also shared a heartfelt post on Instagram following Donald Trump’s decision to move the US embassy in Israel to Jerusalem in 2018.

She even joined a group of demonstrators gathered in London for a “Free Palestine” protest in 2017. The model reportedly saw the protest as she was driving to her hotel and decided to get out and join the marchers. 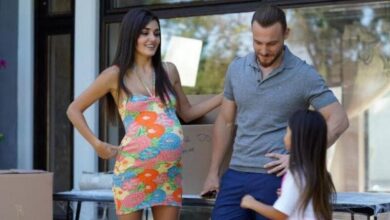 Kerem Bürsin: I Love To Wear Pink …& Hande Erçel Causes a Storm With Her Swimsuit Picture