Halle Berry has revealed she had her first orgasm when she was 11.

The Catwoman actress, 54, spoke about her first experience of exploring her sexuality when she and friend Lindsay Flores were asked a series of sex-related questions for their ‘Bad & Booshy’ series on Instagram.

Halle recalled: ‘I remember my first orgasm… I did it to myself.’

Lindsay asked how old she was, to which Halle replied: ’11.’

She added: ‘I was diddling. I was figuring out my sexuality, like most girls.’

But, when the pair were asked to spill the details on their ‘craziest sexual escapades’, Halle refused to answer.

Meanwhile, it was recently claimed that the former Bond girl and her boyfriend Van Hunt’s ‘chemistry is through the roof’.

The Hollywood star – who has 12-year-old Nahla with former boyfriend Gabriel Aubry and seven-year-old Maceo with ex-husband Olivier Martinez – has fallen head over heels with the 50-year-old musician, who has taught her to ‘love again’.

A source said: ‘She’s had some negative experiences [with men] but Van has taught her to love again — and love herself.

‘He’s a wonderful, caring man. Their chemistry is through the roof.’

The couple made their relationship Instagram official in September, when Halle posted a picture of herself donning a t-shirt with the musician’s name emblazoned across it and tagged him in it.

In July, the ‘Gothika’ star sparked speculation she had a new man when she shared a picture of her feet playing footsie with a male in bed during a romantic birthday trip to Las Vegas.

And in the caption for the snap in the Van merchandise, Halle wrote: ‘now ya know…’, along with the foot emoji and a black love heart.

The picture of the feet was captioned: ‘Waking up Vegas! Thank you for all the beautiful birthday wishes from my friends and my very supportive and loyal fans!

‘You ALL helped to make my birthday extra special.’

Van also shared snaps on his own page on the photo-sharing app, and even posted an intimate photo of Halle leaning in to give him a kiss on the cheek.

He wrote underneath it: ‘Kisses land softly.’ 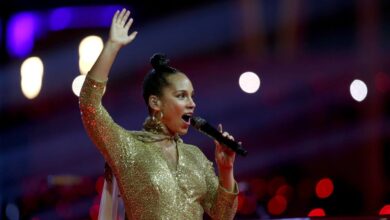 Gal Gadot Reveals She is Expecting Her Third Child