On Tuesday, news spread on social media that Egyptian actress Hala Shiha might be in a relationship with preacher Moez Masoud.

Followers assumed the couple is dating because of the latest picture Moez shared with his 13.8k Instagram followers.

In the picture Masoud was sitting on a sill and playing guitar at night. He captioned the shot: “Many thanks to the gorgeous human being who captured this raw moment 😎 you know who you are.”

In return, Hala commented: “Hey Moez, who took it !!?”, and Masoud responded: “Someone very special 😊.”

Hala Shiha was married to preacher Yusuf Harrison for 12 years and they have four children together. She quit acting, wore hijab and moved to Canada to live with her husband and children. However, in 2019 she announced her divorce from Yusuf, returned to Egypt, took off hijab and returned to acting.

As for the last marriage of Moez Masoud, he was married to actress Sherry Adel, and their separation took place more than a year ago. 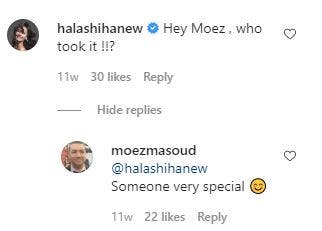 Nancy Ajram Joins TikTok After Branding the App ‘A Waste of Time!’ (Video)