“In Search of Light” is Hala Ezzedine’s second exhibition at Agial Art Gallery, the follow-up to “Looming Landscapes,” which was shown at the Hamra gallery in 2018.

The Arsal-born artist uses unblended colors and foregrounds that mix with the background. A viewer cannot quickly glance at Ezzedine’s work, but instead must give their eye time to blend the different colors and brushstrokes. Only then does the figure or landscape fully appear from the canvas.

The artist’s style is moody and expressive. She seeks to convey both “sadness and happiness” through her distinctive, bold application of vivid colors.

Ezzedine describes herself as an intuitive artist who paints what she sees and feels. The artist was previously a public school teacher in Arsal, which lies near the Syrian border. In one of her untitled pieces, she depicts a man walking in the cold, harsh winter of the mountainous Bekaa region.

While working as a teacher in Arsal, she taught refugee children who had fled across the border with their families to escape the civil war in Syria. The portraits do not include any clues to the legal status or country of origin of the children. Their humanity and existence are enough for Ezzedine.

The artist is now based in Beirut, and the Burj Hammoud skyline and Sanayeh Garden features in her work, as do local children from her surrounding neighborhoods.

Ezzedine commenced work on the collection for “In Search of Light” before the protests in October 2019, and continued the work until after the Aug. 4 port blast. How time has been split by the blast is evident in her work.

“Before and After 4 August” depicts two portraits of the same child – one painted before the port blast, the other afterward. Before Aug. 4, Ezzedine had planned to cut the canvas in half to create two separate portraits but after the blast decided to keep the canvas whole and paint a second portrait of the child.

“Hell,” an angry and fiery depiction of Burj Hammoud, was painted for the exhibition before the port explosion. Yet, full of lurid orange and yellow strokes, the landscape immediately recalls the blast. Ezzedine drew inspiration from Dante’s “Divine Comedy,” which through allegory, charts the journey of the soul to heaven through Hell and purgatory.

According to the “Divine Comedy,” the gate to Hell is inscribed with the fatalistic words “All hope abandon ye who enter here,” yet the poem also tells us that “the path to paradise begins in hell.” Similarly, “In Search of Light” looks to a brighter future while implying a current state of darkness. 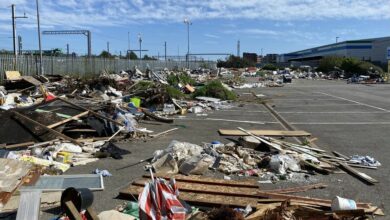 Invisible to everyone, but safe together: Life in a labour colony

Antarctica’s A-68: Is the world’s biggest iceberg about to break up?