Dust storms, hail and flash floods have battered beleaguered Australian cities in recent days, extreme weather that has diminished the threat from scores of wildfires that continue to blaze across the country’s southeast.

To the west, a 300-kilometer (186-mile) wide cloud of red dust was carried by wind gusts up to 107 kilometers (66 miles) per hour and descended on the drought-stricken towns of Dubbo, Broken Hill, Nyngan and Parkes, local media reported. Much of the dust is top soil from New South Wales state farms.

Hail struck Melbourne, Australia’s second-largest city, on Sunday and more hailstorms are forecast to return. The city has been choked by smoke from distant wildfires in Victoria State in recent weeks.

Unusually intense storms over the weekend caused flash flooding in the cities of Brisbane and Gold Coast in Queensland State just north of New South Wales, where most of the wildfire destruction has occurred.

The fires have claimed at least 28 lives since September, destroyed more than 2,600 homes and razed more than 10.4 million hectares (25.7 million acres). The area burned is larger than the US state of Indiana.

Widespread recent rainfall in New South Wales and Victoria have helped but have not extinguished major fires in Australia’s two most populous states.

Authorities have warned the fire danger will escalate this week in both states with rising temperatures and drier conditions. 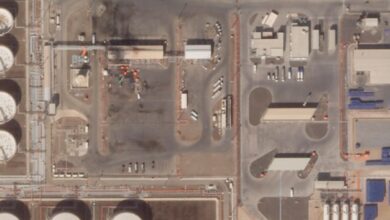