Wearing a Burton coat and handmade mittens gifted to him by a local teacher almost three years ago, Sanders waited for the inauguration to start, bundled up, with his arms and legs crossed. Almost instantly, the image became a meme.

Now, Lebanese diva Haifa Wehbe decided to jump on the bandwagon by sharing her own version of the Bernie Sanders meme on Twitter — and fans can’t get enough.

The pop star posted a 2019 photo shoot of herself leaning against a gas pump featuring the chilly legislator sitting behind her.

“Your heart is snow… my heart is fire,” she captioned the post, which she shared on Twitter.

“The most funny meme I’ve seen in my life,” commented one user.

“The best meme so far,” agreed another fan.

Social media users superimposed the 79-year-old into a number of different scenarios, art works and pop culture tropes, including rapper Drake’s “Views” album cover, inside Edvard Munch’s “The Scream,” and sitting front row next to Frank Ocean during fashion week.

Fans even edited the senator and his famous upcycled gloves  into the pottery making scene from the classic film “Ghost” starring Demi Moore and Patrick Swayze;

Just days after the image was seen and memed around the world, Sanders’s camp released an image of the Senator on a sweatshirt, which immediately sold out and saw 100% of the proceeds go toward Meals on Wheels Vermont. 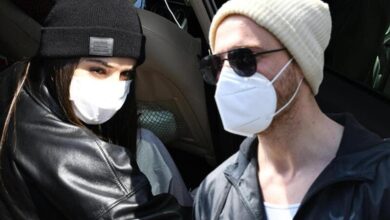