Greta Thunberg has demanded that world leaders end the ‘madness’ of investing in exploring the use of fossil fuels.

The 17-year-old Swedish activist and 21 other youth climate campaigners are calling on the leaders who will be attending the World Economic Forum in Davos this month to immediately ditch holdings in fossil fuel companies.

In an article she wrote for the Guardian, she said: ‘Anything less would be a betrayal against life itself.

‘We demand that you play your part in putting an end to this madness.’

She noted that a whopping $5.2trillion (£4trillion) was spent across the world last year on subsidising fossil fuels, according to the International Monetary Fund.

She added: ‘Young people are being let down by older generations and those in power.

‘To some it may seem like we are asking for a lot. But this is just the very minimum effort needed to start the rapid sustainable transition.’

The group, which includes activists from the US, Australia, Brazil, Russia, India and Nigeria, are demanding that ‘all companies, banks, institutions and governments immediately and completely divest from fossil fuels.’

The Davos meeting, which begins on January 21, will also cover topics such as How to Save the Planet, Fairer Economies and Better Business. 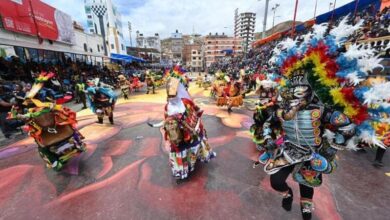 Woman Aims For Guinness by Running 100 Miles on Treadmill