In October last year, day-wage labourer Duryadhan Das was out looking for work in Sitamari village when his phone rang. He was instructed to come to Guwahati Medical College in the capital of India’s northeastern state of Assam, where his father, 70-year-old Falu Das, had been admitted due to a “deteriorating health condition”.

Five days after the call, on October 24, 2019, Falu would go on to become the 28th inmate of Goalpara detention centre to die under unexplained circumstances.

“We did not know he was unwell. He had been in the hospital for five days before they contacted us. The Indian government killed my husband,” Korbula Das, his wife of 30 years, told Al Jazeera.

Falu, a Hindu of Bengali origin, was placed in detention in Goalpara district in July 2017 after failing to prove his citizenship to the quasi-judicial “Foreigners’ Tribunal” (FT). There are 100 FTs that decide the citizenship of people suspected of being foreign or “doubtful” citizens – a concept introduced in 1997.

More than 1,000 people have been languishing in six detention centres in the state, where immigration has dominated politics since hundreds of thousands of refugees poured into Assam during Bangladesh’s liberation war in 1971.

The northeastern border state has also had a border police force of more than 4,000 officers since the early 1960s, tasked with “detecting and deporting” people coming in from neighbouring Bangladesh, branded as “foreigners”.

In August 2019, the National Register of Citizens (NRC) – a Supreme Court-monitored bureaucratic citizenship exercise – was published, excluding Falu and nearly two million people of Bengali origin. They have essentially been rendered stateless.

‘Send his body to Bangladesh then’
Falu’s family refused to accept his body, angry his life had been taken by a bureaucratic exercise that has torn countless families apart.

“We showed them every valid document in his name and yet, he was declared a foreigner. If he was indeed a foreigner, then his body should be sent to Bangladesh. The Indian government jailed him, believing that belonged to that country,” said Bhagu Das, Falu’s younger son, still seething with anger.

“My father spent his last two years in jail for failing to establish any relationship to Indian citizens in court. How come they now believe we are family when it is time to cremate him?”

Muslims in Germany call for action against far-right groups 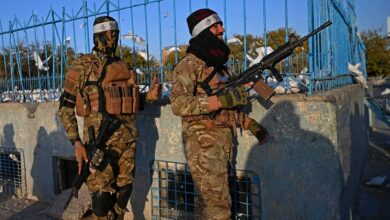 US advice to banks: OK to transfer aid money to Afghanistan