A Mowgli girl who survived nearly two weeks alone clinging to her loyal puppy in the Siberian wilderness has won a Russian children’s beauty contest.

Karina Chikitova’s victory comes as she makes progress as a promising young ballerina after her astonishing survival in a forest infested with brown bears and wolves.

In August, 2014, there there were headlines around the world when she was found after a dozen days and nights lost in the remote taiga sleeping on a bed of long grass and eating wild berries to stay alive.

Then aged four, she cuddled her mongrel puppy Naida for warmth in the shivering cold before the dog found its way home to a remote village, urging rescuers not to give up, and to go and find the little girl.

Karina’s ordeal was seen as so remarkable that a statue was erected to her and the dog in regional capital Yakutsk.

A popular children’s book was also written about her, and her fame as a Mowgli seems to have led this remote village girl to amazing new opportunities.

Karina was ‘excited’ after she easily won the Mini Miss contest in a social media poll, making her a young ambassador for Yakutia, Russia’s diamond region, the coldest inhabited place in the world.

She is also a promising ballerina, already studying full time in Yakutsk, some 350 miles from her home.

Now she has been invited in 2020 to Moscow to meet leading ballet stars including world famous dancer Nikolay Tsiskaridze, now rector of the world famous Vaganova Academy.

She said: ‘I want to become a ballerina and dance Swan Lake. I have also learned how to play the jaw harp and piano.’

Bilingual Karina is doing well at school, too, where she has a talent for maths, and is learning English to add to her fluent Yakut and Russian.

Her guardian in Yakutsk, Albina Cherepanova, 60, said: ‘She may become a ballet dancer.’

This would mean a specialist ballet education separate to the normal school system.

‘If it doesn’t work out with dancing and ballet, she will finish school and continue to study. Karina loves maths.’

Globally-renowned fashion designer Irina Krutikova promised Karina a fur coat to keep warm in her region where temperatures plunge in winter to minus 60C.

‘She behaves with dignity, beautifully and attractively. She speaks fluently both Yakut and Russian.’

In 2014 Karina had followed her father into the dangerous forest – but he did not realise she had trailed him.

The dog accompanying her finally left her in her makeshift bed of long grass after nine nights to go and summon help.

When she was found her rescuer Artyom Borisov said: ‘She was sitting deep in deergrass, completely silent.

‘I didn’t actually notice her. She saw me and stretched her arms forward.

‘I picked her up, she was so tiny, so light, like fluff. She didn’t have shoes on.

‘Her face, legs and arms were bitten to blood (by mosquitos). She was dead scared.

‘Straight away she asked to for water and food, and burst into tears. To be honest I could hardly hold back tears, too.’

Later Karina said: ‘It was Naida who rescued me. I was really, really scared.

‘But when we were going to sleep I hugged her, and together we were warm.’

When Karina was reunited with the dog, Karina’s first words to her pet were: ‘Why did you leave me?’

Yet the dog’s action in finding her way back to the family’s village almost certainly saved the child’s life by giving rescuers confidence she was still alive. 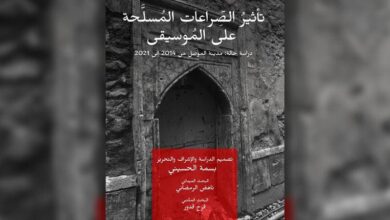 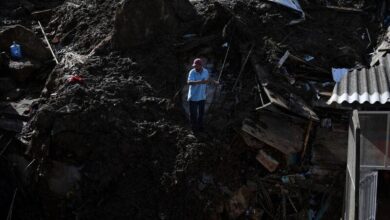