A German man has been charged with selling items to a Russian company controlled by the secret service knowing they were being covertly used to make weapons, prosecutors said on Tuesday.

From 2017, the suspect named as Alexander S. allegedly peddled items worth around one million euros ($1.1 million) to the unnamed Russian company.

Prosecutors said the company was used by Russian intelligence service as a cover to import goods under the pretense they were for civilian use when they were actually destined for the military industry.

The indictment comes amid the worst tensions between Moscow and the West since the Cold War over President Vladimir Putin’s troop build-up at the border with Ukraine.

Germany’s Bafa export agency had expressed concerns to Alexander S. several times about the Russian company and its end buyers, the prosecutors said, prompting him to lie about the recipients in his export documents.

In one case, equipment was seized before it was exported.

In another, Alexander S. was prohibited from exporting a piece of equipment but then went on to arrange the delivery of a similar item from an Asian country, the prosecutors said.

He is also accused of exporting electronic equipment worth a total of around 21,000 euros to a Russian institute that developed products in the field of nuclear weapons between September 2019 and November 2020.

In 2014, the EU banned the sale and export of so-called “dual use” goods to Russia that could be intended fully or partly for military purposes due to the conflict in Ukraine.

In order to circumvent this ban, the institute made use of various intermediary organizations to continue to procure equipment and components that could be used for military purposes, the prosecutors said.

Alexander S. allegedly knew about this and made three deliveries to one of the intermediary organizations without informing the authorities.

Germany and Russia have been at odds over the years over several burning issues, including cyberattacks and a string of espionage cases that Berlin has blamed on Moscow.

Amid the latest tensions, Germany has come under fire for its refusal to send weapons to Ukraine despite repeated requests from Kyiv. 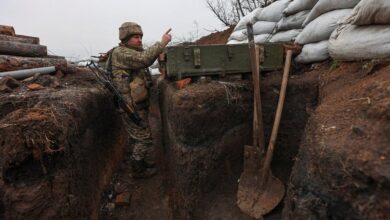