After an arduous three-day journey from Egypt to the Gaza Strip, Amal Brika, a young journalist, was hoping to get home, take a warm bath and sleep.

But she was shocked upon learning that she would be subjected to a compulsory quarantine as part of efforts to combat a potential outbreak of the new coronavirus pandemic in the besieged coastal enclave.

Brika, along with dozens of other Palestinians, was sent to a school near the Rafah border in southern Gaza.

“I protest against the unhealthy quarantine; we were 200 people in the school, eight in each classroom and all men and women sharing only one dirty bathroom. I didn’t feel comfortable and privacy,” she told Al Jazeera by phone.

Similar complaints flooded social media as Gaza’s authorities, led by Hamas – the group that governs the Strip, struggled to take severe measures to prevent the arrival of the novel virus to the tiny enclave.

No infections have yet been detected in the strip, which is home to some two million people and suffering from an ongoing Israeli-Egyptian blockade.

The blockade, imposed after Hamas’s 2007 takeover, has essentially cut off the area from the rest of the world.

No tourists can visit as Israel and Egypt have largely kept their borders shut.

In recent years, both countries lifted some travel restrictions, allowing more Palestinians in Gaza to exit, usually on humanitarian grounds and after a long process of clearance to get hard-to-obtain permits.

But as the coronavirus spreads in neighbouring Egypt and Israel, the Hamas-led government has realised it must act quickly, given the limited capacity of Gaza’s healthcare system.

The blockade, Palestinian political division and three Israeli offensives over the past 12 years have rendered the healthcare system in Gaza overstretched and under-sourced, according to the World Health Organization (WHO).

“The health system won’t be able to deal with hundreds or thousands of cases, so the best thing here is the absence of the (COVID-19) disease,” Abdelnasser Soboh, WHO director in Gaza, told Al Jazeera.

Soboh said there are not enough protective clothes for medical workers or intensive care equipment and ventilators – all vital to combat a potential outbreak.

There are only 62 ventilation devices across Gaza, more than two-thirds of which are already used by other patients. As for the detection of the coronavirus, there are only two test kits, enough to examine 190 people, Soboh said.

“There are no funds to buy equipment, and if money is available, there is a global scarcity,” Soboh added.

‘We need doctors’
Meanwhile, Dr Nidal Ghunaim, head of the infection control department at the health ministry, said authorities are working to overcome the obstacles and equip quarantine centres.

He told Al Jazeera that the ministry is stepping up its efforts by increasing the testing capacity, as he blamed the blockade for “the shortage of capabilities and medical staff”.

Ghunaim said 49 suspected cases were tested that came back negative.

A 30-bed field hospital set up near the Rafah crossing point with Egypt would be used if coronavirus cases were diagnosed.

So far, eight temporary quarantine centres have been opened in Gaza, mostly at schools.

The health ministry says 2,708 residents are in self-isolation at home after returning earlier via Israel and Egypt, and about 800 arrivals this week were transferred to special school quarantine centres.

On Tuesday, Israel and Egypt completely sealed off crossings into Gaza.

When the ministry announced the opening of the first obligatory isolation centre at a school, there was an outcry against the conditions. Images showed mattresses on the ground.

Many were dissatisfied with the overall lack of privacy.

Though half of Gaza’s workforce is jobless and poverty levels stand at about 52 percent, activists have organised donation campaigns.

Some of Gaza’s struggling businesses donated food parcels, makeshift beds and sanitisers to those who were quarantined.

Brika, who had to cut short her visit to Egypt, said arrivals were not subject to screening upon arriving at the Palestinian side, and were taken away in buses at midnight to the schools.

“As soon as I saw the mattresses on the grounds, I shivered from cold,” she said.

“We need doctors to monitor our health conditions, take care of the elderly and educate us about safety measures and how to deal with each other, especially in this crowded school,” Brika said.

On the first day, she posted photos from the school showing herself wearing a face mask and sitting with other women under the sun.

The donations brought some relief. Brika later posted a picture from the classroom showing beds with a thick, colourful bedcover.

“This is our hotel,” she wrote, but insisted, “without a private room and bathroom, self-home quarantine is better than staying here.” 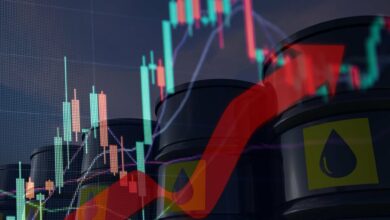 Infographic: How much of your country’s oil comes from Russia?