Before he died in 1994, former United States President Richard Nixon had an “uh-oh” moment of historic proportions, at least according to his speechwriter William Safire – a moment of doubt that is reverberating to this day.

“I asked him – on the record – if perhaps we had gone a bit overboard on selling the American public on the political benefits of increased trade [with China],” Safire wrote in an opinion piece for The New York Times in 2000.

“That old realist, who had played the China card to exploit the split in the Communist world, replied with some sadness that he was not as hopeful as he had once been: ‘We may have created a Frankenstein’,” Safire quoted Nixon as saying.

Last month, US Secretary of State Mike Pompeo invoked that apocryphal mea culpa in a speech at California’s Richard Nixon Presidential Library and Museum, as he and his boss, President Donald Trump, attempt to put China back into a Cold War-like deep freeze.

Pompeo said Washington and its allies must use “more creative and assertive ways” to press the Chinese Communist Party to change its ways on unfair trade practices, human rights abuses and efforts to infiltrate US society, calling it the “mission of our time”.

The irony, of course, is that their late Republican hero had made thawing out China’s relationship with the West the centrepiece of his presidency – while he was not battling political scandals, that is.

“There is no place on this small planet for a billion of its potentially most able people to live in angry isolation,” Nixon famously wrote in October 1967, setting the tone for his policy of detente towards China once he entered the White House in 1969.

The decades that followed have seen China rise from the ashes of Mao Zedong’s Cultural Revolution to become the world’s second-largest economy. Today, it is anything but isolated, even if not everyone is its friend. Few, if any, countries can say they are not affected by China, either politically, economically or both.

But as the economic war between the US and China morphs into a rapidly escalating political dispute, threatening their phase-one trade deal reached in January, the close ties the two countries have built up since the 1970s are unravelling. This is creating opportunities for some commercial interests on both sides, but also risks for others.

And while the two giants slug it out, many smaller economies are being forced to take sides. The collateral damage of the great US-China decoupling is spreading.

Some aspects of the decoupling of the world’s top two economies had begun even before Trump took office in 2017. Rising costs in China, increased automation – and growing anger at Beijing’s appropriation of intellectual property in exchange for access to its markets – had already been pushing some Western companies to start looking at alternatives to China.

But the US-China trade war forced many firms to move quickly.

There are now a number of fronts along which the two countries are engaged in direct economic or political conflict.

These include punitive tariffs placed by the US on about $370bn worth of Chinese imported goods, and retaliatory levies by China; the US’s accusations that Chinese telecommunications equipment maker Huawei Technologies helps Beijing snoop on its enemies; the coronavirus; a row over Beijing’s move to impose a security law on Hong Kong; US sanctions on some Chinese individuals linked to alleged human rights abuses against Uighurs and other minority Muslim groups; territorial disputes in the South China Sea; and most recently, the tit-for-tat closures of each other’s consulates in Houston and Chengdu.

All these developments have pulled the two superpowers further apart. The tariff war in particular has made a sizeable dent in both economies.

The US Federal Reserve estimates the conflict (PDF) has resulted in a net loss of employment among US manufacturers in the first half of 2019, while the Federal Reserve Bank of New York says the trade war wiped $1.7 trillion off the value of US-listed firms over the two years since it began.

Meanwhile, the United Nations Conference on Trade and Development says higher US tariffs on Chinese goods resulted in a 25 percent dropin Chinese exports to the US, and tens of billions of dollars of losses for Chinese firms. 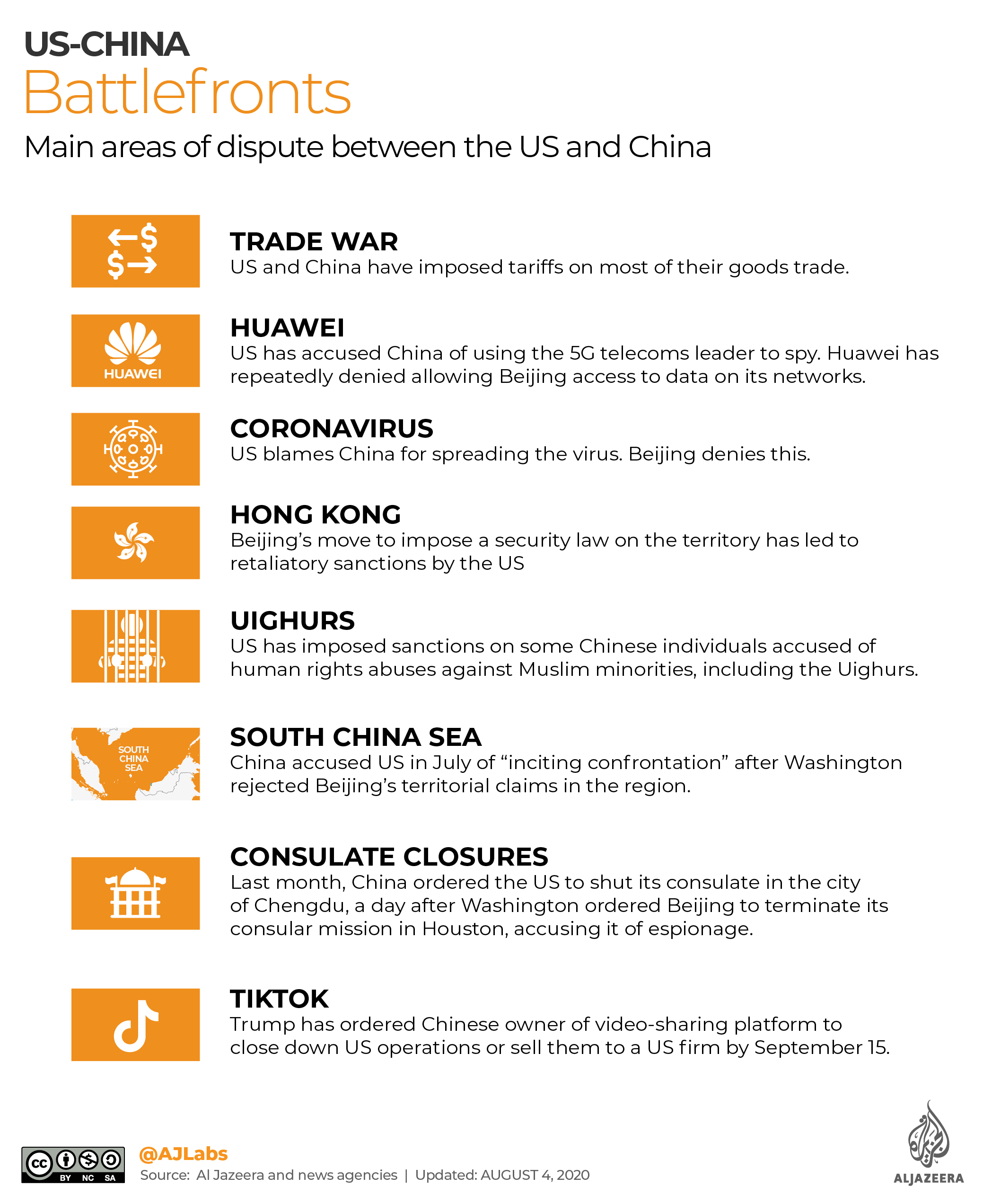 Lebanese army’s neutrality, legitimacy put to the test amid clashes with protesters