Thousands of people have marched in cities across France to protest the COVID-19 health pass that is now required to access restaurants and cafes, cultural venues, sports arenas and long-distance travel.

For a sixth straight weekend, opponents on Saturday denounced what they see as a restriction of their freedom. Many criticised the measure, claiming the French government was implicitly making vaccines obligatory and unfairly restricting the rights of the unvaccinated.

In Paris, four demonstrations were organised by different groups and more than 200 protests were taking place elsewhere in French cities and towns. Last week, more than 200,000 marchers turned out according to interior ministry figures, while organisers claim the real number is nearly double that.

The pass shows that people are fully vaccinated, have had a recent negative test or proof of a recent COVID-19 recovery. The law authorising it also made vaccinations mandatory for French health workers by September 15.

At the head of the Paris march in the early afternoon, a few hundred people held up flags and banners with the word “Liberty” on them while shouting “Macron! We don’t want your pass!”

The protest movement has brought together conspiracy theorists, antivaxers, former members of the “Yellow Vest” anti-government movement, as well as people concerned that the system unfairly creates a two-tier society.

Far-right leader Florian Philippot, who has accused Macron of turning France into a dictatorship and likened the health pass to apartheid, was at the Paris rally on Saturday.

Despite the protests, polls have shown that the majority of French people support the health pass. Millions have received their first vaccine shot since French President Emmanuel Macron announced the measure on July 12.

Since last month, France is registering a high number of infections – about 22,000 each day, a figure that has remained stable over the past week.

More than 47 million people in France, or 70.2 percent of the population, have received at least one vaccine shot and more than 40.5 million, or 60.5 percent, are fully vaccinated – a higher rate than in Germany and Italy and only slightly behind the United Kingdom. 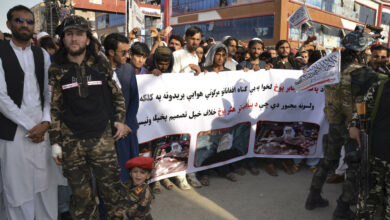 At least 47 dead in Afghanistan after Pakistan attacks: Officials