On Sunday, French people will head to the polls to vote in the first round of presidential elections.

While the Emmanuel Macron presidency has been beset with tumultuous events in the past five years – such as the increasing cost of living and the coronavirus pandemic – voters will have a chance to choose whether to stick with him for another term or change course in favour of more radical leaders.

Russia’s war on Ukraine has given Macron an opportunity to flex his muscles as a head of state, using France’s membership of NATO to conduct shuttle diplomacy.

Despite Macron being the only frontrunner who is pro-NATO, the unlikely event of France leaving NATO should another candidate win will only marginalise the country from its allies, most importantly the United States.

And while far-right Eurosceptic candidates Marine Le Pen and Eric Zemmour have made no secret of their staunch criticisms of the European Union, they have stopped short of calling for “Frexit”.

“Europe has been a huge part of Macron’s agenda during his term,” Duclos said. “His track record has been mostly positive, with the vaccination and stimulus package as a result of the coronavirus pandemic all dealt at a European scale.”

This has made it more complicated for candidates to base their campaigns on leaving the EU.

“Marine Le Pen understood this, but nonetheless she’s still hostile to European institutions and will vouch for state sovereignty above all. If elected, it will definitely weaken France’s position in Brussels.”

According to research conducted by the Ipsos group, 58 percent of those polled said purchasing power is the most important topic to them. Healthcare and the environment followed, at 27 percent and 25 percent respectively.

Frederic Marty, an economist at the National Centre of Scientific Research (CNRS) and lecturer at the University of Cote d’Azur, said France is witnessing its worst inflation in 30 years.

The concept of the decline in purchasing power is not new, he said, adding that it appeared right after the transition to the euro currency.

“This was essentially linked to what we call an anchorage bias, with the consumer’s perception set in the past,” Marty said. “Between 2000 and 2020, we witnessed an inflation of approximately 2 percent per year. Over 20 years, that accounts for 35 percent.”

The ones that are most affected by this are lower-income households, who are finding themselves struggling to make ends meet.

People who live in the suburbs and use a car to commute are finding it difficult as well, due to the rise in energy prices – which the Ukraine war has exacerbated.

The demise of the left

Out of the 12 candidates running for election, seven of them are from the left. A lukewarm attempt made last April for the left to run as a united front behind a single candidate was rejected, resulting in the ever-widening fragmentation of left-wing votes.

Unlike the French right wing, which runs campaigns based on differences of opinions, the left wing has core beliefs they disagree on, said political analyst Thomas Guenole.

“The French left wing should have two major candidates: reformist and radical,” he said.

While far-left Jean-Luc Melenchon – currently polling in third place – can be considered from the radical camp, his party’s anti-capitalist ideology refuses the idea of a united left on principle.

“Melenchon will never be able to go to the second round and to unite the left behind him because he is an extremist,” Guenole said.

The reformist left, represented by the Greens and the Socialist Party, also refuses to merge – even if their views are, according to Guenole, representative of the right and left wing of the same party.

The scattering of the left vote – or the collapse of it – is attributed to the political spectrum’s general shift to the right.

“Half of the far-left voters are now left voters,” he said. “Left voters have shifted to the centre or towards the right.”

“In 1982, 50 percent of the constituents were voting for the left,” he added. “Nowadays, one voter out of four is doing so. The global electoral left has collapsed by more than 50 percent.”

The issue of immigration has been a staple of French presidential elections for decades, particularly with the rise of the far-right National Front party in the 1980s.

According to Gilles Ivaldi, a researcher at Cevipof Institute at Sciences Po, the fear of immigration is directly linked with the “economic and cultural concerns” of a multicultural society – mainly understood to be how Muslims fit into European societies.

“All these issues became political concerns,” he said. “Studies show that French people think there are too many immigrants in France, and a major part of them want to limit the number entering the country.”

Macron has “hardened his immigration policy due to the pressure of the public and the rise of the far right”, Ivaldi said.

The overall trend in public opinion, which stretches to the majority of European countries, is what Ivaldi described as an “identitarian closure”.

For politicians, he went on to say, it is a matter of striking a balance between this trend, the necessity of immigration to bolster the workforce of an ageing country, and the obligations to international law regarding refugees and family reunification. 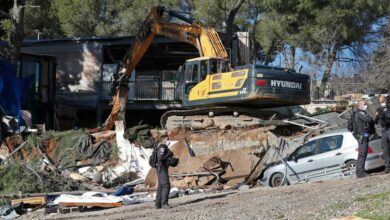