The terrorist who beheaded a French school teacher for showing cartoons of the Prophet Mohammed had exchanged WhatsApp messages before the attack with an outraged parent who tried to have the teacher sacked, it emerged today.

Chechen jihadist Aboulakh Anzorov was in contact with the father of a girl in Samuel Paty’s class who had mobilised a campaign against him over the cartoons, police sources said.

The father, Brahim Chnina, is in custody after France’s interior minister accused him of launching a ‘fatwa’ against Paty who was killed in the Paris suburbs on Friday.

Chnina had put his phone number on a Facebook post with a video calling for protests against Paty, and later published details of the teacher and his school.

The French government said today it would honour Paty with a posthumous Legion d’Honneur, France’s highest order of merit.

But his killer is also being celebrated by ISIS terrorists who have produced horrifying propaganda using a photo of Paty’s severed head.

The images were taken by 18-year-old Anzorov after he murdered Paty and shortly before he was shot in the street by police.

The depraved image has featured in a magazine published in India, which says: ‘If your freedom of expression doesn’t stop you from criticising Prophet Mohammed then our swords will not stop defending the honour of Prophet Mohammed.’

Anzorov is believed to have shared the graphic images with fellow Russian-speaking jihadists before it was distributed among pro-ISIS accounts on Telegram.

A witness who saw Paty’s severed head described seeing Anzorov take pictures of it in the moments after the killing and before the terrorist was shot dead by police.

The murder has led to a renewed crackdown on extremism in France where ministers plan to shut down two Islamic organisations and a Paris mosque.

One imam apologised today after his mosque shared details of Paty and his school on Facebook following a campaign by an outraged Muslim father.

‘Given what happened we regret having published it, said imam M’hammed Henniche, according to France Info.

‘We are currently seeing how in the future to take a step back before getting carried away on things like that.’

While ISIS has not claimed responsibility for Paty’s killing, the magazine has previously urged people to emulate the Charlie Hebdo attack in Paris which was also seen as revenge for blasphemy against Mohammed.

The Charlie Hebdo attackers were ‘leaving a clear path for others to follow’ because Western governments would not ‘carry out the punishment for the blasphemy prescribed by Islam’, the ISIS magazine said.

The 2015 killings were the first in a series of terror attacks which have rocked France in recent years, including Paty’s beheading last Friday.

According to the SITE Intelligence Group, a US-based monitor, supporters of al-Qaeda have also been ‘celebrating’ the attack and sharing graphic images online.

There have also been posts from ISIS and al-Qaeda supporters ‘claiming [the killer] will inspire other lone wolves’, according to SITE director Rita Katz.

Meanwhile, Paris prosecutors said they had opened an investigation into a French neo-Nazi website hosted abroad that republished the photo of Paty’s corpse.

The teacher’s murder has led to renewed promises of action against Islamic extremists in France, with police conducting a series of raids on Monday.

Fifteen people have been detained so far, including four pupils who may have helped the killer to identify the teacher in return for money.

Law enforcement carried out 40 raids on Monday, mostly around Paris, with many more planned.

‘We want to harass and destabilise this movement in a very determined way,’ one government source said.

In addition, a 14-year-old French schoolboy has admitted identifying Paty to the terrorist who beheaded him after accepting the equivalent of €300 (£270) in cash.

The boy who accepted the money shared it among three friends, who are also all in custody. None of the children are thought to be Muslim and it is not suggested that they knew of Anzorov’s terrorist plans.

‘Anzarov said he simply wanted to film the teacher and ask him to apologise for showing the drawings to his class,’ said an investigating source.

Interior minister Gerald Darmanin vowed there would be ‘not a minute’s respite for enemies of the Republic’, after tens of thousands took part in nationwide rallies.

Darmanin said the government would also tighten its grip on institutions and charities with suspected links to Islamist networks.

Officials named two groups they would target for closure – the Collective Against Islamophobia in France that says it monitors attacks against Muslims, and BarakaCity, which describes itself as a humanitarian organisation.

In a social media post, BarakaCity accused Darmanin of ‘going mad’ and said he was taking advantage of a tragedy.

Darmanin also ordered the closure of a Paris mosque, accusing its imam of encouraging intimidation of the teacher and publicising the school’s address.

President Emmanuel Macron is due to attend a ceremony today in Paris after vowing new measures against extremism.

Paty, 47, was attacked on his way home from the secondary school where he taught in Conflans-Sainte-Honorine, 25 miles from central Paris.

Anzorov was shot dead after refusing to put down his weapons in a dramatic stand-off with police soon after he murdered Paty.

A witness, who gave only his first name Stephane to news channel LCI, said he was nearby when the ‘barbaric’ attack happened, sheltering with his children.

‘We did not know what is going on. There was just a beheaded man in front of our house,’ he said, adding he saw the assailant take pictures.

A photo of the teacher and a message confessing to his murder was later found on the Anzorov’s phone.

The terrorist had arrived in France with his family from the predominantly Muslim Russian region of Chechnya more than a decade ago.

Four members of the killer’s family were among those detained.

The people under investigation also include the father of a 13-year-old schoolgirl who was in Paty’s class when he showed the controversial images during a lesson about freedom of expression.

Paty had given Muslim children an opportunity to leave the classroom, but the lesson nonetheless led to uproar.

The father, Brahim Chnina, launched an online campaign against the teacher and has now been arrested along with a known Islamist radical.

Chnina he wanted the teacher removed and went to see the principal of the school to complain, prosecutors said.

That evening, he put out another Facebook video, giving the name of the teacher and identifying the school.

Speaking on Monday, Darmanin accused the pair of issuing a ‘fatwa’ against the teacher which the terrorist had acted upon.

Emotions were still running high outside Paty’s school on Monday, where Muslim leaders gathered to offer condolences and distance their religion from the atrocity.

‘It is very important to come here to show our sorrow, to show that what happened here is not Islam. It was done by thugs who have nothing to do with Islam,’ said Kemadou Gassama, an imam in Paris.

Believe it or Not! British Newborn Weighs Around 28 Kilos 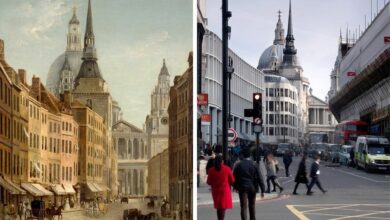