Some 500 years ago, Sultan Suleiman the Magnificent pondered building a ship canal to bypass the Bosphorus. Now that dream is close to being realised with the latest and most ambitious of Turkey’s “megaprojects” launched under President Recep Tayyip Erdogan.

The plan to construct a 25-mile (40-kilometre) waterway skirting the north of Istanbul to connect the Sea of Marmara to the Black Sea has been given the go-ahead, with work scheduled to begin this summer, in mid-2021.

With an estimated build time of seven years and a price tag ranging from $9.3bn to $14.6bn, according to government estimates, the Istanbul Canal has been framed by its supporters as a smart investment that will pay returns in the form of shipping revenues and reduced traffic in the Bosphorus Strait.

But sceptics abound. Geopolitically, the project has cast doubt over Turkey’s commitment to the international treaty that governs shipping in the Bosphorus and Dardanelles straits.

It has also been criticised as yet another of Erdogan’s megaprojects that could endanger the environment, leave the state out of pocket, and leave the Turkish economy, which is heavily dependent on external financing, even more vulnerable to shifts in global investor sentiment

The Istanbul Canal is the latest in a string of infrastructure projects the government has embarked on since 2013, when Erdogan announced a $200bn, 10-year building spree.

Another intercontinental bridge at the Dardanelles is due to be completed next year.

Dozens of lesser schemes have also been built to the extent that barely a week passes without a new stretch of motorway opening, or an airport or train line.

The Istanbul Canal, though, could well eclipse them all. Dubbed a “crazy project” by Erdogan when he first suggested it in 2011, the canal would be the jewel in the crown of the president’s legacy, forever changing the city where he grew up.

The government has extolled the canal for its potential to reduce the volume of ships using the Bosphorus – one of the world’s busiest and most difficult-to-navigate waterways. It is also highlighting the amount of money the canal could collect from ships passing through it.

Some are also questioning whether the canal will fill Turkey’s coffers to the extent anticipated by the government, noting that ships can currently pass through the Bosphorus for a nominal fee and there would be little incentive to pay to use the canal.

Moreover, previous megaprojects have left the public out of pocket when expected revenue failed to reach ambitious projections, leaving the state to fulfill guarantees for companies under build-operate-transfer contracts.

The government reportedly paid more than $515m in 2019 to the operator of the third Bosphorus bridge, opened five years ago, to cover a shortfall in anticipated toll revenues.

“We as taxpayers will compensate the money for the ships which are not passing through the canal under the guarantee give to contractors,” he told Al Jazeera.

Urbarli also said that the canal’s route would destroy lakes and rivers that supply Istanbul’s water and threaten marine and freshwater ecosystems.

Gulcin Ozkan, professor of finance at King’s College London, said the cost-benefit analysis of such projects appeared “lopsided” from financial and environmental perspectives.

“Most megaprojects in Turkey entail significant environmental costs, as consistently put forward by experts, environmentalists and professional bodies such as the Union of Chambers of Turkish Engineers and Architects, and consistently disregarded by the government,” she told Al Jazeera.

Such counternarratives to the government’s canal pitch have fuelled speculation that the greatest beneficiaries of the megaproject would be private contractors building a “new city” on 8,300 hectares (20,510 acres) surrounding the proposed canal.

Real estate companies’ shares rose as much as 8.65 percent on the Istanbul exchange after zoning plans for the canal were approved on March 27.

Haluk Levent, an economics professor at Istanbul Bilgi University, described the canal project as “the first stage of a Ponzi scheme” that could fuel inequality.

“The growth model predominant in Turkey for a long time is based on the monetisation of rent,” he told Al Jazeera, “and as a result, has led to a deepening of social problems such as unemployment and income inequality.”

“The important thing is the city that will be built around the canal and the income from this city,” Urbarli said. “The agricultural land which was acquired cheaply will suddenly be turned into residential areas and we’ll watch as some of the lucky few get richer.”

The canal has also raised concerns over Ankara’s commitment to the Montreux Convention, which gives Turkey control over the Bosphorus and Dardanelles and guarantees access for civilian vessels during peacetime while limiting the passage of warships.

A group of retired Turkish admirals who warned against backing away from the 1936 Montreux Convention were arrested last week.

Approached for comment on criticism of the canal, the president’s office referred Al Jazeera to a section of its website outlining the government’s argument for the proposal and to comments by Erdogan on Wednesday.

In a question-and-answer session with young people, Erdogan said the canal had “nothing to do with Montreux” and would allow Turkey to “completely establish our own independence, our own sovereignty”.

Most lawyers agree the canal falls outside the purview of the convention but could threaten the treaty, raising the prospect of increased militarisation in the Black Sea as well questions over how traffic in the Bosphorus would be regulated.

Under the 19-year rule of Erdogan’s Justice and Development Party, Turkey enjoyed a prolonged period of economic expansion, much of it bolstered by a construction boom propelled by easy credit from foreigners.

But in recent years the picture has turned gloomier, as Turkey’s reliance on external financing comes home to roost whenever global investor sentiment turns against the lira.

The lira has halved in value since a 2018 currency crisis, hitting a record low of 8.52 against the United States dollar in November.

The lira’s woes intensified last month after Erdogan suddenly sacked Turkey’s central bank chief Naci Agbal, who had raised interest rates in an effort to rein in inflation – and who had, by doing so, clawed back some credibility for the bank with investors. Agbal had been in his post just four months when Erdogan showed him the door, making him the third central bank chief sacked by the president in the last two years.

Many have suggested Agbal lost his job because of Erdogan’s belief that high interest rates feed inflation – a view that collides with economic orthodoxy because higher interest rates raise borrowing costs and are therefore considered to be inflation fighting.

Agbal was also said to be investigating how Turkey spent some $128bn in foreign exchange reserves defending the lira under the stewardship of Erdogan’s son-in-law, Berat Albayrak, who resigned as finance minister in November.

During the first meeting on Thursday under the watch of Agbal’s successor, newly installed central bank chief Sahap Kavcioglu, the bank kept its benchmark interest rate unchanged and dropped a pledge to maintain a tight monetary policy.

Lira weakness isn’t only felt by Turkish consumers. Every time the currency drops against the dollar, Turkish companies laden with debt denominated in foreign currencies, especially the dollar, see their servicing costs go up.

That fallout has cast a shadow over showpiece construction schemes such as Istanbul’s new airport.

Infrastructure projects previously boosted growth, but the existence of guarantees in foreign currency, often for up to 25 years of operation, undermine their value to Turkey.

A loss such as those the lira has experienced in recent years “sharply raises the fiscal implications of state guarantees for these major projects,” Ozkan said.

“State guarantees also extend to turnover guarantees, which appear to be set at unrealistic levels in normal times, hence leading to disastrous consequences following economic activity coming to a halt during the COVID-19 pandemic,” she explained. “This has been particularly the case for Istanbul Airport, with most air routes being shut since 2020.”

Such shortfalls led to “an increasingly large hole in the public finances”, Ozhan said. Turkey’s public debt stands at around $268bn, or some 40 percent of gross domestic product at the end of 2020.

Istanbul Mayor Ekrem Imamoglu, who represents the main opposition party, has been a chief critic of the canal, describing it as “one of the biggest risks that this city had in its entire history”.

He has called for the money to be spent instead on public transport, water supply, social projects, education and earthquake protection measures.

“The Canal Istanbul project is like major and risky surgery that no one would want to go through unless it’s totally necessary,” he told a meeting last year. “We’re talking about a surgery that will chop off the city and fundamentally damage its vital systems.” 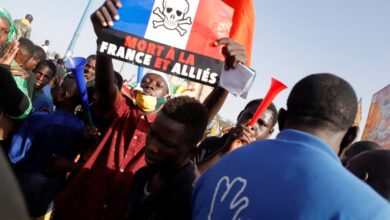 North Korea says South, US should ‘pay’ for military drills