The new year is starting with more new cases of the flu.

Influenza activity is high in the U.S. — with almost all regions of the country affected — and is expected to continue for weeks, the Centers for Disease Control and Prevention said in its latest update, which covers the season through the week ending on Dec. 28, 2019.

The latest #flu activity report is out, showing Washington, D.C., New York City, Puerto Rico and 34 states experiencing high flu activity. Find out if your state is on the list: https://bit.ly/2AfIS02 . 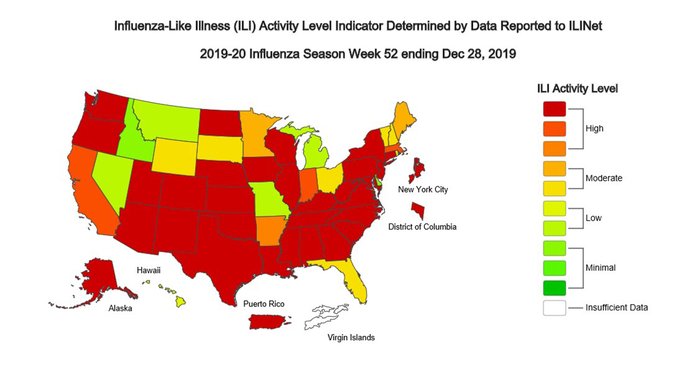 Many people are spreading the virus after visiting their families for the holidays and then traveling back home and bringing the illness back with them. People with the flu are most contagious in the first three to four days after their illness begins.

So far this season, there have been at least 6.4 million flu illnesses, the CDC estimated. Some 55,000 people have had to be hospitalized and 2,900 have died.

It’s only the beginning of January, so there may be a long road ahead: Flu activity usually peaks between December and February, although it can last as late as May.

A common cold and the flu have many similar symptoms, which makes it very difficult to tell the difference. What are the tell-tale signs you have the flu?

Flu symptoms start abruptly and include:

A cold makes people feel miserable with symptoms such as a runny nose or congestion, but the illness comes on gradually and patients normally improve without a doctor’s help. The flu also lasts longer — five days or more. It can lead to complications such as pneumonia and strep throat.

If you do have the flu, there are medications that can help shorten the length of time you feel sick. Flu drugs include:

The drugs should be taken as soon as possible to have an impact, ideally within two days of the flu symptoms starting.

It’s not too late to get the flu shot

There are ways you can prevent the flu. The No. 1 recommendation on that list is getting a flu shot. It’s not too late to get vaccinated, the CDC advises.

It’s still possible to get the flu after being vaccinated, but the shot can reduce the severity of illness so it’s still worthwhile to get even if it’s not 100% effective in preventing influenza.

Other ways to prevent the flu include:

How to Stick to Your Diet

Doctor’s Note: Can you boost your immune system?

Brazil VP contradicts Bolsonaro: ‘Of course’ we will buy vaccine

Is Not Wearing A Bra During Self-Isolation A Bad Idea?