The official number of global COVID-19 deaths has topped five million, but a new report has suggested the pandemic true death toll could be more than three times that figure.

According to the worldometer COVID-19 tracking tool, at least 5,039,536 people worldwide have died of the coronavirus since the onset of the pandemic, while the latest figures on Thursday show 248, 938, 575 people have been diagnosed with the disease to date.

The US leads the tally of global COVID-19 deaths with more than 750,000 casualties to date.

But a report by The Economist suggests the true death toll could be in the region of 17 million.

The news outlet said that when COVID-19 first hit northern Italy in February 2020, they noticed that “something strange was happening.”

“There were 1,140 deaths attributed to the virus in parts of Bergamo province in March, for example, but the overall increase in fatalities compared with the same period in the previous year was 2,420. Similar phenomena were soon noticed in America, Britain, Spain and other countries,” the Economist reported.

In July the Indian government rejected studies which suggested that millions of people have died in the country from COVID-19, several times the official toll of almost 420,000.

It said in a statement however that several Indian states were now “reconciling” their data after dealing with a spike in cases in April and May.

It followed a study by US research group the Center for Global Development suggested anywhere from 3.4 million to 4.7 million people had died in India, between eight and 11 times the official number.

“They typically rely on testing for the virus, which can be patchy, and use definitions which exclude indirect consequences of the pandemic, such as extra deaths in overburdened hospitals,” the report noted. “Fortunately, there is a better way to calculate death tolls. To measure those of events such as wars, researchers do not check how many dead people have bullets in them, but on something much more reliable: how many more died during them than one would expect in normal years.”

This is known as “excess deaths.”

The gulf between official and reliable counts of covid-related deaths means that while the global toll officially passed 5 million on November 1, the actual number of people lost to the virus is, by The Economist’s count, closer to 17 million.

They are not the only organization to point out the disparity.

The World Health Organization, which declared COVID-19 as a pandemic in March 2020, has previously said that it considers the actual death toll to be at least 60 percent higher than figures reported officially.

The Economist said that undercounts are much more significant in poorer countries.

They pointed to Bulgaria. There, pandemic deaths are probably nearly twice as high as the official tally.

“In Russia, the official statistics seem to underestimate the true number of COVID-19 deaths by a factor of 3.5; in India the government’s number underestimates the death toll by a factor of ten,” said The Economist report. “As well as leading to a poor understanding of the virus’ true spread, this phenomenon means that the pandemic’s impact is underestimated most in the countries with the least resources to fight it.”

Latest figures released by our World in Data showed that almost half (49.9 percent) of the world’s population have received at least one COVD-19 vaccine, with 7.15 billion doses administered globally and an average of 27.19 million administered daily.

Yet most vaccinations have taken place in developed countries.

Only 3.9 percent of people in low-income countries have received at least one dose of a COVID-19 vaccine.
”There are still some reasons to use the official death counts,” The Economist report said. “They can show trends over time within countries, for example.”

“But too often they are used to compare rich and poor countries or to assess the global death toll—metrics for which they are useless. They are still used, however, because they are more up to date than excess-death counts, and, unlike them, are available for all countries.”

The Economist said it has found a way to remedy this situation, and says it is the only source of daily updated estimates of excess deaths around the world.

To find the true death toll of the pandemic, The Economist first collected mortality data for all countries where it was available (with help from researchers and volunteers), and then built a machine learning model to predict it where it is unknown.

The organization has made these estimates, as well as their data, code and models, freely available, and presented its work to the World Health Organization, among others.

Their estimates find the most likely global death toll to be 16.8 million, with a “confidence interval of between 10.3 million and 19.5 million.”

The likeliest date for when deaths due to the pandemic passed five million fell in the first week of December 2020, it said. 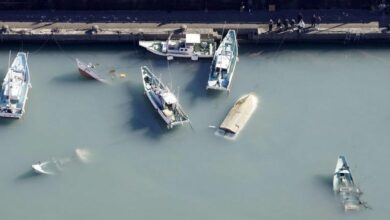 ‘Moral giant’: How the world reacted to Desmond Tutu’s death