Five people were killed and over a dozen injured in a bombing near a school in Somalia’s capital Mogadishu on Thursday, a security official said, in the latest attack claimed by al-Shabaab in the troubled country.

“There was a car bomb blast… the death of five people was confirmed and 15 others were wounded”, security official Mohamed Abdillahi told AFP, adding that 11 students were among the injured victims.

“We don’t know the target of the attack,” he said.

But witnesses said a large convoy carrying troops from AMISOM, the African Union force fighting the extremists, was passing through the area when the bomb went off.

“I was close to the area when the blast occurred, there was an AMISOM convoy… passing by,” Said Ibrahim told AFP.

Witnesses said the bomb caused heavy damage to the school and vehicles parked nearby.

“The school building was badly damaged and some of their school buses destroyed”, Ahmed Bare, a security guard at a nearby building, told AFP.

The director of Mogadishu’s Aamin ambulance service, Abdikadir Abdirahman, shared photos of the rubble-strewn scene on Twitter, calling the bombing “a tragedy”.

Al-Shabaab claimed responsibility for the bombing, which followed a deadly attack on Saturday that killed a prominent Somali journalist.

Abdiaziz Mohamud Guled, the director of government-owned Radio Mogadishu, was a fierce critic of the al-Qaeda linked militants.

Al-Shabaab, which has been waging a violent insurgency against the country’s fragile government since 2007, said its fighters had long pursued the journalist.

The militants also claimed two attacks in September that together killed 17 people.

A car bombing on September 25 near the presidential palace killed eight people, including the prime minister’s adviser for women and human rights, Hibaq Abukar.

Eleven days earlier, nine people, most of them members of Somalia’s security forces, were killed in a blast near a Mogadishu checkpoint.

Al-Shabaab controlled the capital until 2011 when it was pushed out by AMISOM troops, but it still holds territory in the countryside and launches frequent attacks against government and civilian targets in Mogadishu and elsewhere. 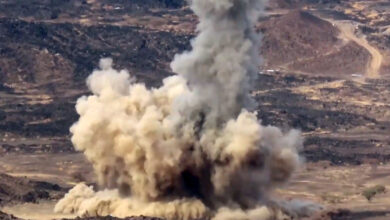