Joe Biden has accused Russia of aiming to end Ukraine’s right to exist as a nation, telling the United Nations General Assembly (UNGA) that Washington wants the conflict to end on “just terms”.

“The United States wants this war to end on just terms, on terms we’re all signed up for – that you cannot seize a nation’s territory by force,” he said.

Biden’s remarks came just hours after Putin announced a partial military mobilisation on Wednesday, calling up as many as 300,000 army reservists to serve in Ukraine.

Russia’s offensive has experienced major setbacks in recent weeks, with Ukrainian forces – backed by US weaponry – recapturing large swaths of territories in a rapid advance in the east of the country.

Biden called for reforms to the UN Security Council (UNSC) to make it more inclusive and better equipped to respond to global challenges.

He said the number of countries who sit on the 15-member body should be increased. Currently, the UNSC has five permanent members – China, France, Russia, the United Kingdom and the US – and 10 rotating states elected to two-year terms.

“We have long supported permanent seats for countries in Africa, Latin America and the Caribbean,” Biden told the General Assembly.

Permanent members of the council have veto power that limits the council’s ability to pass resolutions against them or their allies.

Although Washington has deployed its veto power on the Security Council dozens of times to shield Israel, a top US ally, from criticism over violations of international law, Biden said on Wednesday that vetoes should be used sparingly.

“Members of the UN Security Council, including the United States, should consistently uphold and defend the UN Charter and refrain from the use of the veto except in rare, extraordinary situations to ensure that the council remains credible and effective,” Biden said. 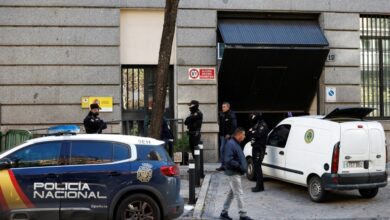 US embassy, five other sites targeted by letter bombs in Spain