“Mine countermeasures ships USS Sentry and USS Gladiator arrived in the Red Sea on Monday, marking the first transit in seven years by 5th Fleet’s MCMs from the Gulf to the Red Sea,” the US 5th fleet said on Wednesday.

“Sentry and Gladiator are conducting Maritime Security ops and training alongside regional partners,” it added.

This marks the first time the Pentagon places this type of naval vessel in the region since the start of the war between Yemen’s internationally recognized government and the Iranian-backed Houthi militia.

The threat posed by the Houthis’ mines to shipping lanes near the Bab el-Mandeb strait have recently increased, endangering one of the world’s busiest oil shipping routes.

The UN Security Council condemned on Wednesday “the increasing number of incidents off the coast of Yemen, including attacks on civilian and commercial ships, which pose a significant risk to the maritime security of vessels in the Gulf of Aden and Red Sea.” 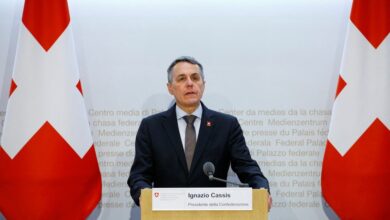