Thanks to the pandemic, film festivals all over the place have been driven online. This country’s latest cinema celebration to seclude itself in cyberspace is the one most invested in the natural habitat.

REEF (Rural Encounters on Environment and Film) officially launched in Qubaiyat, Akkar, in 2019. Rolled out in the town’s old silk factory, the festival’s ambitious slate of environment-focused local and international films ran in counterpoint to a program of country hikes and tours engaging with rural culture – hinging on the location’s environs.

For REEF 2020 organizers had imagined building on the success of its first edition – open-air screenings and conferences, environmental activities a yearlong training programme called “Eating From Nature.” COVID-19 put the kibosh on that.

Responding to the genuine desire for change percolating beneath the country’s various crises, REEF will stage a physical – albeit sparsely attended and socially distanced – event in the Bisri Valley.

A panel discussion and “The Bisri Valley victory … What’s next?” will assemble the region’s residents with legal and environmental experts and activists who struggled to save and protect the valley from development that many voices warned would have been environmentally catastrophic.

The debate will be followed by a projection of Mohammad Sabbah’s short “The Land,” which documents the questionable premises of the Bisri Dam project, the campaign that activists, local farmers and shepherds led against it, and the environmental and geological dangers surrounding the project.

Acknowledging the threat of coronavirus, this discussion is by invitation only.

Festival screenings will be projected virtually on aflamuna.online, running Oct. 8-14. The film program is comprised of a shorts competition of 20 titles and three themed non-competitive sections.

The competition clusters films culled from an open call announced in May, all of which address the pandemic’s impact on people’s lives and on nature.

“The festival shorts are all brand new,” REEF artistic director Elaine Raheb said. “The contributors include Lebanese filmmakers and filmmakers living in Lebanon, students and non-students. We didn’t oblige them to do anything but told them we wanted to see reflections on the universe, on themselves, a personal point of view, on nature, how this made you change things in your life, you know, personal films. We’re not interested in films explaining Corona.”

The out-of-competition program includes a mixed bag of local and international titles centered around three themes: Portraits of Rural Lives; Land is Political; and Rethinking the World.

Lebanese shorts projecting outside the competition include Zeina Sfeir’s “Between the Devil and the Deep Blue Sea” and Muriel Aboulrouss’ “My Father’s Land.”

Aboulrouss’ 2016 short looks in on some elderly folks in the north Lebanon village of Mazraat Bani Saab as they reflect upon their relationship with each other and the land.

Shot earlier this year as Lebanon’s economic and financial crises festered, Sfeir’s short begins with a question, “How to film it?” “It” isn’t spelled out immediately, though she does say a television news report on the tattered state of Lebanon’s “social welfare” system prompted memories of her departed parents. The short was originally shown as part of “Living in Times of Coronavirus,” a series that went online during Beirut’s springtime lockdown.

REEF also provides an opportunity to catch up on a number of features from the MENA region that made wave as they did the rounds of the international film festivals. Well-regarded titles include Amer Shomali and Paul Cowan’s Shawn the Sheep-ish “The Wanted 18,” from 2104, and “Roshmia,” Selim Abu Jabal’s touching 2015 portrait of an elderly couple under Israeli occupation.

UK drew up blueprint to tackle a China-born coronavirus 16 years ago: Report 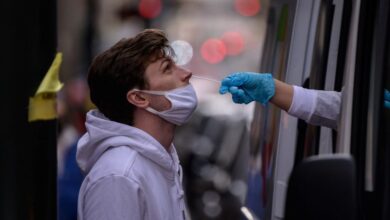 Rapid testing for omicron: is a nose swab enough?